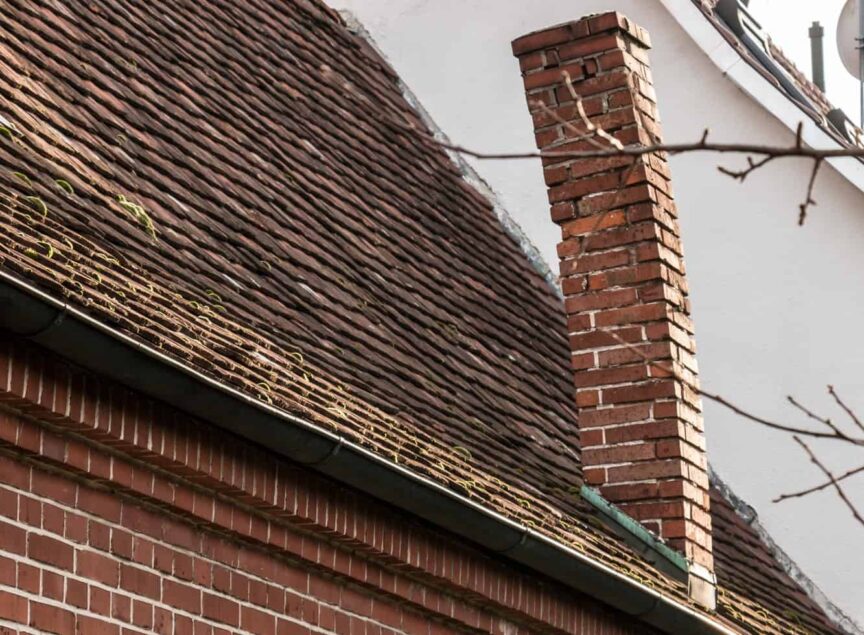 Autumn is in the air, leaves are falling, and pumpkins are in high demand. Typically, tilting chimneys are often present in traditional folklore and spooky tales, but have you ever wondered where these myths come from? Or what the actual cause is behind the bending bricks?

Here are the 2 most common reasons behind crooked chimneys:

The rest of this article will explain more details about the top 2 reasons behind a crooked chimney, including the history behind a witches bend and some common problems related to a crooked chimney you should look out for.

1. The “Witches Bend” Was Favored in the Past

During the mid-1800s, particularly in the northeastern portion of the United States, masonries often intentionally created a bend in chimneys that’s today formally referred to as a witches bend.

“Witches bend” is a term used to describe an otherwise structurally sound chimney with an intentional tilt or lean toward the top.

Today, crooked chimneys usually inspire visions of ghouls, ghosts, and others that go bump in the night.  Contemporary folklore surrounding the tilted chimney style isn’t far from the true history of the original design.

You may be wondering why people of the time wanted their chimneys to look like what most people today would consider being a sign of a haunted house. According to publications of the period, like the Scientific American, people enjoyed the crooked chimney for stylistic reasons and perceived home improvements.

So, how can you tell if an expert designed your chimney to tilt intentionally or if it’s signaling a more significant structural problem?

Typically, you can tell if your crooked chimney was intentionally constructed with a bend with just a few observations.

First, check to see if it’s located only in the attic. Second, if your home was built about a century ago, and if it seems structurally sound, then it’s likely that it was supposed to tilt at the peak. However, if you have any doubts about a tilt in your chimney, always consult with a Chimney Safety Institute of America (CSIA) certified professional.

Now you might be wondering why a bent chimney became a popular aesthetic choice in the first place. Well, the answer lies in traditional spooky folklore.

Witches themselves have a strong presence in not only American history but various world cultures. According to Smithsonian Magazine, the “witchy craze” was a widespread phenomena centuries ago in both Europe and America and had deep connections to Satanism.

As a result, “a witches bend” became a popular chimney design.

The witches bend in chimneys served as a protective measure against witches. According to the folklore of that time, if the chimney were slightly bent, witches would be unable to fly down through the chimney and terrorize the home’s inhabitants.

It took a highly skilled masonry to produce a witches bend effectively. So, suppose you notice a crooked chimney, particularly in the northeastern portion of the U.S., as long as there aren’t other observable issues. In that case, it’s likely a safe and structurally sound edifice.

2. Your Chimney May Have a Structural Problem

While a crooked chimney alone isn’t indicative of a more significant issue at play, it’s still worthwhile to get an inspection, especially if you notice other internal or external chimney concerns.

Before jumping to the worst-case scenario, though, be sure to check with the professionals. If you feel like there’s an issue with your chimney, the best thing to do is seek advice from experts. Make sure that any chimney inspection you get is by a certified expert masonry.

The Chimney Safety Institute of America (CSIA) certifies individuals for completing training and practical experience. Make sure the professional you contact has their CSIA credentials before inspecting or working on your home. Also, check out the CSIA’s list of chimney inspections in this article.

If you’re seeking a general list of common problems creating crooked chimneys, here’s a list of typical defects and issues:

Again, structural concerns with chimneys are complicated and should be handled carefully by professionals to avoid damaging your home.

A chimney that’s leaning is always concerning, especially if you’re not sure if this was an intentional design effort.

One way to tell if the tilt in your chimney was done on purpose or if it’s a sign of a severe issue is to look for gaps positioned alongside the siding.

If you notice gaps forming in the siding of your chimney, there could be a foundational issue with your chimney. You should contact a professional to assess the damage.

Gaps in the chimney siding can cause a whole bunch of problems. If there are gaps, then water and bugs could be getting into your home. Moisture buildup could result in mold in your home or a bug infestation.

Check for Cracked, Crumbling, or Deteriorating Mortar or Bricks

Similarly, suppose you observe cracked or crumbling mortar or bricks in your chimney. In that case, this could indicate either an interior or exterior issue, depending on where the cracks are.

Some cracks could mean that there’s a tear in your chimney liner. In contrast, exterior cracks could indicate a footing problem, including those in the bricks or mortar.

Suppose you notice any cracks in the bricks or mortar of your chimney. Check to see if the bricks are level. If they are, this could mean that the tilt in your chimney was intentionally done. However, if they’re not level, then you may have a problem.

See if There’s Any Exterior Staining

Finally, suppose you notice stains on the exterior of your chimney, along with a bend or tilt in structure. In that case, this could mean that gasses are escaping the duct and may be entering your home.

Gasses from the chimney can be hazardous. For this reason, it’s essential to always consult a CSIA certified technician with all of your chimney questions and concerns.