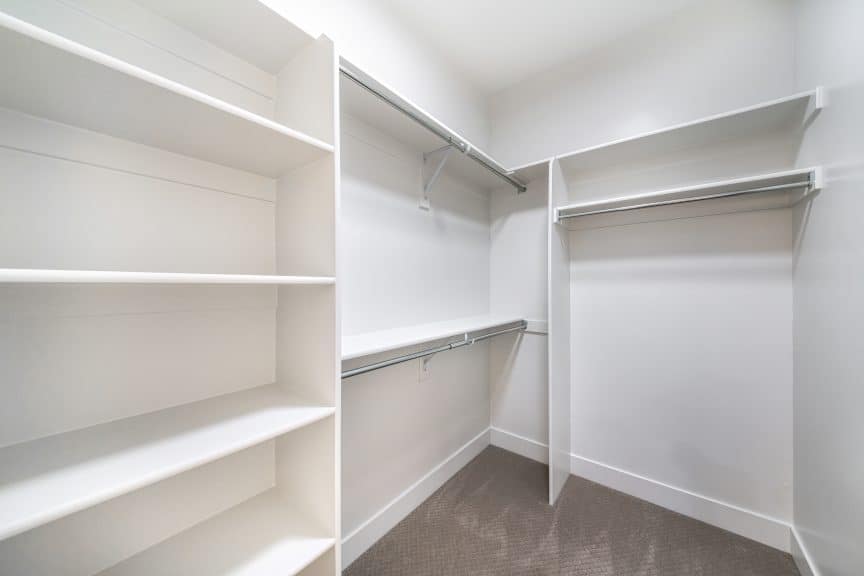 Home remodeling involves creating new spaces or repurposing old ones. The closet is a frequently remodeled area; the walls are brought down to create more space. But before you can bring down a closet wall, you’ll need to ensure that it’s not a load-bearing wall.

Closet walls can be both load-bearing or non-bearing. To determine if a closet wall is a load-bearing one or not, study its building plan, as it usually provides such information. Other methods include checking for perpendicular floor joists and consulting with experts.

The rest of this article explains the methods listed above in greater detail and explores several other ways you can tell when a closet wall is a load-bearing wall.

How To Tell if a Closet Wall Is Load-Bearing

Before you knock down or modify a closet wall (or any wall at all), it’s best to know if it’s load-bearing or not, as bringing down a load-bearing wall can be disastrous.

Here’s a list of non-invasive ways to help you identify a load-bearing closet wall:

1. Study the Building Plans and Blueprints

Blueprints and building plans are the best and most reliable way to tell if your closet wall is load-bearing or not.

The building plans can tell you if a wall contains a support beam and the direction of the floor joists. It’ll also tell you which walls are load-bearing, as they’ll be marked with the letter “S” for structural. So, by carefully studying the blueprint, you can easily tell if your closet wall is load-bearing or not.

Sometimes, homeowners may not have a copy of the building plans, especially when they’re not the property’s original owners. In such cases, you’d need to ask the original owner for it. If that’s not possible, you can get a copy from the county clerk’s office or the original building contractor.

Joists are long horizontal supports that span over open spaces, usually between beams. And the direction of the joists can tell you when a closet wall is load-bearing.

Go into the attic or basement, and note the direction that the joists run. In a basement, you’ll need to search for the first floor to see the joists, while in an attic, you’ll look down to the floor below.

If the joists run perpendicular (at 90 degrees) to the wall in question, that means the wall is load-bearing and shouldn’t be tampered with.

However, if the joists run parallel (in the same direction) as the closet wall, it’s likely not load-bearing, and you may knock it down. The exception is if one of the parallel joists rests directly on the wall. In this case, the wall may be carrying a load from the joist.

3. Know What’s Below the Wall

Load-bearing walls (and other structural elements) carry the weight of the building, starting from the roof and upper floors, and they transfer this load to the foundation. As such, load-bearing walls are most often directly above one another on each floor.

If the closest wall you’re investigating is on the second floor, check if there’s a wall in the same spot on the lower floors. If there’s one, your wall is most likely a load-bearing wall.

Similarly, if the wall in question is on the first floor, go into the basement or crawl space and see what’s underneath. If there are any beams, girders, or piers between the wall and the foundation, or there are joists running perpendicular to the wall, the wall is a load-bearing wall.

You can’t look under first-floor walls in houses with no crawl space or basement, so look above instead. If there’s a wall directly on top of the one you’re investigating, it means it’s most likely carrying the load of the wall on the upper floor.

4. Assume All Exterior Walls Are Load-Bearing

While it’s possible to erect a building with non-bearing exterior walls, it can be quite costly and usually not seen in residential buildings. As such, it’s safe to assume that all exterior walls are load-bearing.

There’s hardly any reason anyone will want to bring down an exterior wall, even if it also happens to be a closet wall.

However, renovations and subsequent additions can turn exterior walls into interior walls. But that doesn’t affect the load distribution, and they’ll remain load-bearing walls. Don’t tamper with a wall you knew was formerly an exterior wall.

If your closet wall happens to be in the relative center of a large house, it’s likely load-bearing, especially if it also runs perpendicular to floor joists or has another wall directly above or below it.

6. Compare the Interior Closet Wall With Other Interior Walls

7. Search for Signs That the Wall Was a Later Addition

Study the wall, and check for telltale signs that it’s not as old as the other walls. Newer-looking wood material or finished flooring that extends under the wall are some signs that the wall wasn’t part of the original structure and was added at a later date, in which case it’s likely non-bearing. But to confirm, check for others signs of a load-bearing wall like perpendicular joists.

The contractor or company that built the house is in the perfect position to tell you whether a closet wall is load-bearing or not, as they’ll likely have a copy of your building plan on hand.

Bear in mind that you may have to pay a fee for the consultation, especially if the house was constructed a while back. But it’ll be money well spent, as whatever cost will be nowhere as much as the amount you’d spend fixing damages arising from unknowingly pulling down a load-bearing wall.

If you’re unable to get the original builder of the house, your next bet should be other building professionals. Consider hiring a structural engineer, building inspectors, home remodel consultants, or building contractors.

These individuals can assess the wall in question and tell you if it’s load-bearing or not and advise on what changes can be made to it without putting the entire building in danger.

If you decide to go this route, do some preliminary research to ensure that you hire the most reputable building professionals in your area.

The best and safest way to tell when a closet wall (or any other wall) is load-bearing is by studying the building plans and consulting the original builder.

Other non-invasive ways include: