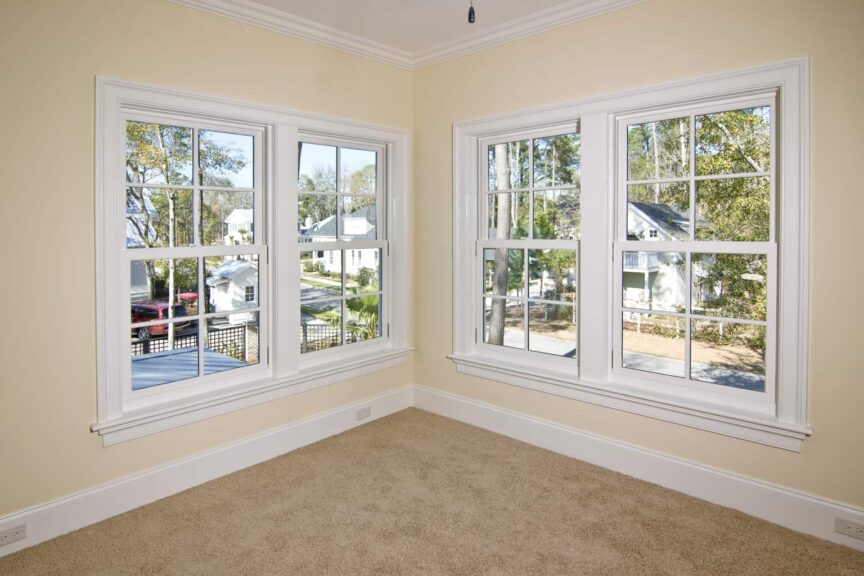 Walls that have studs in them are perfect for holding mirrors, arts, and wall-mounted shelves to keep these objects from falling off. However, if you’re looking for other places to hang things, you may wonder whether your window frames are strong enough to hold other objects. You first need to ask yourself whether they have studs in them.

Window frames themselves don’t have studs in them, however, the rough opening frame onto which the window frames are attached does have studs. In fact, the frame around the opening is made up of double studs to provide increased rigidity. Builders double the studs around the frame to ensure the window area is sturdy and the opening doesn’t collapse.

The rest of the article will look at all you need to know about studs. We’ll also look at other ways to find stud locations around your home.

What Are Wall Studs?

Studs are thick and sturdy wood or metal, which means they can hold screws and nails better than your standard drywall. If you screw on objects on the studs, they are unlikely to fall off or break without external influence.

Builders typically measure drywall “on-center,” which means you can measure from the center of one stud to the center of the adjacent stud. Builders put this design standard in place to ensure the drywall is always evenly supported.

Why Window Frames Don’t Have Studs in Them

Window frames don’t have studs because windows are not a part of the house framing. Builders install window frames after the wall is already in place. However, the parts of the wall meant to hold window frames feature twin studs for extra fortification. The idea is to ensure that the wall segment is strong enough to hold the weight of the average window.

So, if you’re looking for studs in your window frames, you should look around them instead of directly on them.

Should You Mount Items on Window Frame Studs?

You can mount items on the studs around window frames as long as they aren’t too heavy. Small pieces of artwork, photos, and lightweight decorations are okay to hang on your window frame studs.

If the item you’re looking to hang will add significant weight to the window area, it may be best to mount it somewhere else. You will also have to consider the practicality of mounting items around window frames and how doing so will affect the look of your interior décor as a whole.

How to Find a Wall Stud

In most homes, you can find a wall stud using a tape measure, magnet, and flashlight. Alternatively, you can use electric wall stud finders. Combining multiple approaches increases the odds of accurately pinpointing the stud’s location. Let’s take a look at your options in further detail.

Electronic stud finders are portable tools specifically designed to – you guessed it – find studs. They’re available in most hardware stores, and you can also order them online. Many of these can differentiate between wooden and metal studs and also alert you if there are electrical wires along the stud.

To use an electronic stud finder:

The marked spot is the stud’s left side. Repeat the process by moving the stud finder to the left to find the stud’s right side.

Tavool Stud Finder Sensor Wall Scanner and ProSensor 710 Precision Stud Finder (both available on Amazon.com) are examples of electronic stud finders you can rely on. They allow easy identification of stud finders behind walls, communicating the stud dimensions on an easy-to-read LCD screen.

Trace Along the Outlets

Domestic contractors fasten light switches and outlets to studs. This means that you can follow them when looking for studs on your walls. Remove the light switch or outlet cover and look underneath with a flashlight to spot the stud edge attached to the box. From there, you should measure around ¾ of an inch (1.91 cm) to find the center of the stud.

You can find studs manually by tapping different parts of your wall and listening to the resulting sound. Use a tape measure to mark out 12, 16, and 24 inches (30.48, 40.64, and 60.96 cm), measuring from one end of the wall to the other. Then, knock at the marked areas. If you hear a solid sound and higher tone, you’ve reached a stud. If it’s an area with low, hollow sounds, it doesn’t have studs.

You may also use magnets around the measured areas to highlight metal studs.

The baseboard on your property is likely attached to studs. This means that if you trace along the baseboard carefully, you’ll be able to find the nailing spot. If you find the nailed hole, you can then trace a vertical line on the wall using a pencil.

As you do so, knock along the line to hear if the sound is hollow or solid. Use the magnet to confirm the presence of a stud in the area.

When you find the studs, make sure to confirm there are no electrical wires around them to avoid disrupting your connection or triggering an electric fire.

Studs are important fixtures of the home’s framing, and you’re likely to find them around your window frame instead of inside the frame. If you’re looking to screw or nail something on your window frame, make sure to confirm that the frame is strong enough to hold the item’s weight. If you don’t do so, you risk damaging both the item and the window frame as a whole.

If you’re looking for a more sturdy location to hang your decorative items, check for studs along your walls or around the window frame using any of the methods discussed above.