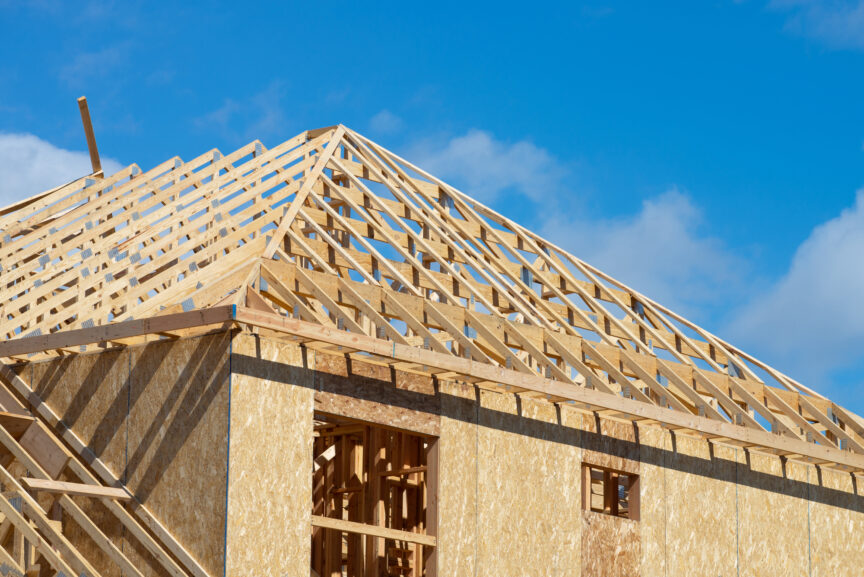 Hip rafters and valley rafters are framing components of a hip and valley roof. Along with common rafters and jack rafters, they help form and define the angled portion of a hip or mansard roof system. While on their own they often appear identical, they differ in how they are used in the roof framing layout.

This configuration is what sets them apart. The hip rafter forms a peak or ridge relative to the adjoining jack rafters, while the valley rafter forms a valley as the name implies. Keep reading as we take a closer look at the distinctions and similarities between these two hip roof components.

What is a Hip Roof?

A stand-alone hip roof has a total of four hip edges. However, when two hip roofs intersect, they create what’s knows as a hip and valley roof system increasing the number of hip edges. The valley, in turn, is formed by the intersecting roof systems.

Hip rafters are only used to frame hip roofs or their variants such as mansard roofs, for example. They differ from standard rafters in that they are positioned at a 45-degree angle relative to the ridge board. This diagonal angle and slope down are what give hip roofs their distinctive shape or form.

A stand-alone hip roof has four hip rafters joined to the ends of common rafters connected to the ridge board above. Because they help support a good amount of weight, hip rafters need to be larger in size (width and thickness) than standard rafters or jack rafters, the structural members that attach to both hip and valley rafters.

It’s common to see 2×8’s doubled up to form the hip rafter. Sometimes 2×10’s are used to increase the depth of the beam. Both of these methods can be effective in strengthening the rafters to prevent deflection and torsion due to winds, snow, and the weight of the roof itself.

Unlike hip rafters which are specific to hip roofs, valley rafters can be used in other types of roofing where two systems intersect. For example, where two standard gable roofs connect a valley rafter is required. Another example is where dormers are used on any roof type.

Valley rafters are shaped similarly to hip rafters in terms of their width and thickness. As long as the two intersecting roof systems are the same height, they will also be the same length as hip rafters. If, however, one roof is a different height than the other, then the valley rafter will be shorter than the hip rafter used within the same roofing system.

Similarities Between Hip and Valley Rafters

While we have covered the differences in the two types of rafters, there are some similarities as well. Both types of rafters are often wider and deeper than the adjoining jack or common rafters. Sometimes, hip and valley rafters are formed by doubling the wood members being used for the roofing system.

Both types of rafters are positioned at a 45-degree angle relative to the ridge board above. They also both descend at an angle (slope) from their peak. This angle can be exactly the same or vary depending on the slope of the adjoining roof systems and whether they meet at the same height.

The way a hip rafter and valley rafter is cut to meet the ridge board and wall below is also the same. This is typically a beveled, plumb cut (perpendicular to grade), where meeting the common boards at the ridge board above, and a beveled, plumb cut at the bottom of the rafter, referred to as the tail. In addition, a notch called a birdsmouth is required where they meet the wall below.

Here is a video that talks about how to frame a hip roof and provides an example of a birdsmouth notch connection:

How Are Hip and Valley Rafters Attached?

Typically, hip and valley rafters are attached in a similar fashion. At the top end, they are usually nailed to the common rafters which, in turn, attach to the ridge beam. This is the simplest and most traditional method of attaching the rafters.

An alternative is to use attachments, such as Simpson Strong-Tie to connect the hip rafters to the edge of the ridge beam. This type of connection requires a ridge beam which is usually located underneath the ridge board. Not all hip roofs have a ridge beam, only roofs with a slope of less than 3 in 12 are required to have one.

Similarly, where the ridge rafter meets the wall below, attachments can be used to connect the rafter to the top plate. However, the more traditional way of doing this is to use nails to attach the top plate. This can be done by driving the nails at an angle into the top plate, a commonly used method in framing known as toenailing.

As you can see, hip rafters and valley rafters have both differences and similarities. On their own, hip and valley rafters appear identical. What distinguishes them is not the shape or size of the members themselves, but rather how the adjoining rafters are positioned relative to them.

Hip rafters serve to create a ridge from which the elements (rain and snow) can drain away. In contrast, a valley rafter creates a condition that attracts drainage from the elements. This is due to the shape of the connecting roof sections which direct rain and snow towards the valley.

These differences have implications not only in terms of how the rafters are configured but also in terms of drainage and structural performance. Each type of rafter is subjected to different loads, rain and snow accumulation, wind forces, and uplift, due to the roof shape they help create.