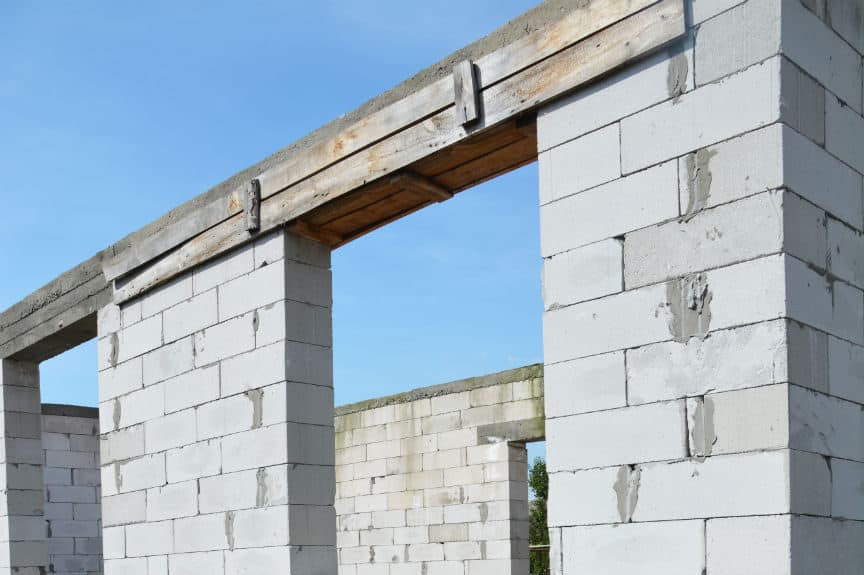 The purpose of a bond beam is to provide horizontal structural support above openings and along building walls. An example would be at the head of a window or door opening. Because openings by their nature create an unsupported condition, bond beams play a critical role in maintaining the structural integrity of walls.

Often, bond beams are used within a building or freestanding wall that requires additional reinforcement. This might be for providing added structural support for wind loads or, in extreme conditions, for hurricanes or seismic activity.

Bond beams are commonly used above openings. However, they can also be used at the top or bottom of walls or integrated anywhere within the wall structure to provide greater reinforcement.

This is particularly useful at locations where the wall is not braced by floors or by the roof structure. A free-standing wall, for example, can be reinforced with the use of bond beams to better withstand lateral forces (i.e., wind loads).

Bond beams can also serve as anchorage for floors and roof structures since they provide a solid surface to which joists and other structural members can be secured.

When used above openings, such as doors and windows, bond beams help support the weight of the wall above the opening. This allows the openings to be larger than they would be otherwise.

How Does a Bond Beam Work?

Bond beams work by creating horizontal reinforcement along a building wall. This is achieved by infilling a series of adjacent U-shaped masonry blocks with either grout or concrete.

In addition to the grout or concrete, steel rebar is used to connect adjacent blocks along the bond beam. This creates a strong structural bond between the masonry units.

Because they are open on the sides, the blocks themselves are connected to one another with grout or concrete. This helps to further reinforce the horizontal continuity of the adjacent blocks.

How Often do You Need a Bond Beam?

The location of a bond beam will depend on the design of the building wall. The number and locations of openings, floor levels, the wall height, and specific lateral load requirements all influence the use of bond beams.

Bond beams or lintels are needed everywhere there is an opening along a wall. They are primarily used above the opening, however, they can also be used at the bottom.

Bond beams are also placed at regular intervals along a wall when used to reinforce the structure. They are also commonly used at the top or bottom of the wall or at each floor level.

Blocks used for bond beams are typically rectangular in shape. The most common type are U-shaped blocks. They are hollow and shaped like a “U” on the inside when viewed in section, thus the name.

Sometimes they will have two square cutouts in the center. Like U-shaped blocks, these types of blocks are also hollow inside with a solid bottom to support the grout or concrete and to allow for steel rebar to run through.

Knock-outs, which are thinner pieces of block that form the internal cores, are often included. As the name implies, they can be removed or “knocked out” to allow for the continuity of steel reinforcement.

Additionally, while lintels are prefabricated, bond beams are often created onsite with most of the same materials used in the construction of a wall. Since they are made of concrete, they can often be custom made on-site using a mold.

While pre-fabricated lintels are more commonly used at openings, bond beams offer a flexible alternative where horizontal reinforcement is required. This allows for their use within walls at varying locations.

Because they are sized and made of the same materials as regular masonry units, they can be integrated within a wall seamlessly. Most commonly, they are used at the top of walls to provide support for roofing members.

They can also be used at the bottom of walls for added support at the base. Likewise, at floor levels, they can provide support and anchorage for floor joists. Where there is no structural reinforcement, bond beams can also be used.

Pre-made bond beam blocks are manufactured in the same sizes as standard concrete or other masonry blocks. This allows them to seamlessly integrate into the design and layout of the walls.

The total width of a bond beam, that is, when all separate blocks are combined to form a single unit, can vary depending on the length of the wall or size of the opening.

Bond beam blocks are designed to allow for both concrete and steel rebar to be housed in their interior. This helps create a strong, continuous, horizontal beam structure that helps support structural loads.

Because they can be easily resized in the field and formed using standard cast-in-place concrete or grout, they offer a good solution in instances where structural support is required.