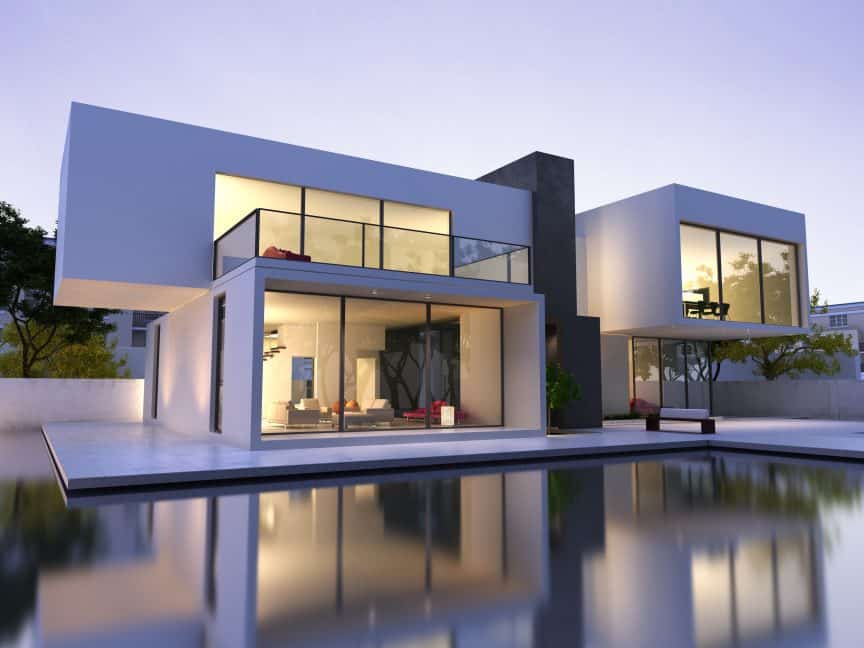 Flat roofs appear to be synonymous with modern houses. While much of this is stylistic, that is they offer a cleaner, more geometric look and modern feel, there are also practical reasons why flat roofs are used in modern homes.

Modern houses often have flat roofs because of their low cost, ease of maintenance, and potential for additional space. Flat roofs were also a pinnacle of Mid-Modern architecture. As this particular design style regains popularity, some of its elements, such as the flat roof, are coming back.

Whether you are choosing between roofing styles for your home or are just interested in roofing in architecture, we will discuss the advantages and disadvantages of a flat roof below.

Why Are Flat Roofs So Appealing?

Every person has their preference when it comes to style.

Even as children, most of us learned how to draw a house with an enormous triangle on the top, marking a pitched roof. You may have noticed that in some homes, this isn’t the case. Flat roofs are easily noticeable in a neighborhood full of pitched roofs.

Flat roofs are so appealing because they’re often easy to inspect and cost less. Also, some people gravitate towards flat roofs because of their attraction to Mid-Modern architecture. The potential for more living space is also a massive bonus of a flat roof.

Flat Roofs Are Easier To Inspect

Naturally, flat roofs are easier and safer to inspect because you can just set a ladder up and walk right on.

Maintenance is just more manageable when you don’t have to worry about falling off of the roof. Generally, flat roofs are easy to access and explore if an issue arises, making them more appealing from a practical standpoint.

The upfront costs of a flat roof are lower because it requires less material and labor to install. Pitched roofs require much more time, labor, and material costs.

The minimal work of a flat roof means that it’ll be done quicker than if you opt for a pitched roof. This is especially appealing if you’re working on a rush project or anxious to get your home move-in ready.

Though you won’t necessarily get more space inside of your home from having a flat roof, they do provide you with more space.

Flat roofs make the perfect place for your solar panels, air conditioner, or HVAC system, as they won’t be much noticeable atop the top since it’s flat. This gives you more space in your backyard, where the HVAC or air conditioner typically resides.

Some people use flat roof space to their full advantage. Flat roofs have the potential for a garden, additional lounging area, or even a pool if you want to get fancy. Having more space atop your roof

With straight lines and a contemporary feel, the mid-modern aesthetic has been gaining popularity.

Sleek lines and elegant design characterize Mid-Modern homes. Flat roofs have commonly been a part of this aesthetic and are an identifying characteristic in most mid-modern dwellings, for a good reason.

They’re not typically associated with cookie-cutter or copy-and-paste homes found in developments in the suburbs. Instead, just the effect of a flat roof can bring a unique energy to a house.

Flat roofs appeal to the modern designer with all of the advantages listed above and a beautiful look. If your style is minimalistic, modern, and sleek, a flat roof is likely an easy choice.

What Are the Disadvantages of a Flat Roof?

While all of the information above may have been enticing, a few disadvantages to investing in a flat roof are worth considering.

The disadvantages of flat roofs are that they typically don’t hold up well to extreme temperature changes, require special drainage features, and are not as common as pitched roofs. While flat roofs cost less upfront, the cost for repairs in extreme weather or drainage may add up.

So, should you invest in a flat roof or not? It depends on the risks you’re willing to take. Below, I’ll further discuss the disadvantages of flat roofs.

If you live in a climate that goes through extreme temperatures, you may want to consider something other than a flat roof.

Especially if you live in a cold climate, flat roofs don’t support a lot of insulation. Though it is possible to insulate a flat roof, it can be a more costly process.

Issues with Drainage Are Common Among Flat Roofs

Drainage is a primary concern when it comes to flat roofs.

If there’s no drainage available on a flat roof, water or snow may gather and create structural issues for the building. If you think about it, pitches and gable roofs are ideal for water run-off and snow. So what do flat-roofed homeowners do during rain or storm season?

There are a few options for flat-roofed homes to get drainage features built-in, but it’ll be an added cost. Unfortunately, drainage is such an important mechanism for a home that this isn’t an optional cost. You’ll need to research options to ensure your room can rid itself of snow and water.

Flat roofs are gaining popularity for many reasons:

Remember, there are a few downsides to installing a flat roof. If you live in a climate that requires a good amount of insulation to keep your home warm, a flat roof may make your house colder.

Weigh your options carefully and reach out to service providers in your area for more of the advantages and disadvantages of flat roofs.