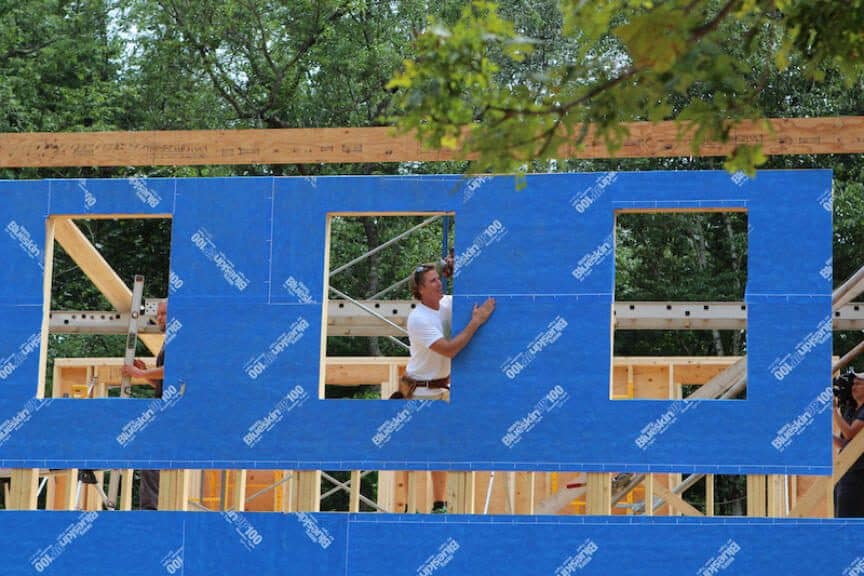 An important component of building insulation is the control of humidity and moisture. Condensation, as a result of moisture, needs to be prevented from entering walls and compromising the integrity of the insulation within.

Condensation control in buildings is critical to prevent damage to structures. Moisture and water vapor penetration across building surfaces needs to be prevented at all costs. This can be achieved through the use of vapor barriers and proper ventilation. Additionally, glass surfaces can be insulated to prevent surface condensation.

Moisture can be generated inside a building or it can come from an outside source. Cooking, human activity, variation in temperatures from inside and outside a building, and water in soil are common causes of moisture production.

How Does Moisture Penetrate Into a Building?

In addition to groundwater intrusion through foundations, there are a few other common sources of moisture penetration in buildings. These include rainwater leaks, leakage of moist air, leaking or burst water pipes, diffusion of moisture through roofs, walls, and floors.

In order to prevent rainwater leaks, roof scuppers and or drains, roof overhangs, drained walls such as cavity walls and rainscreens, sealants at doors and window openings, and water repellant finishes are typically used.

Leakage of moist air is a common problem in buildings and so careful attention needs to be placed on sealing any potential sources of infiltration. Moist air, or water vapor, can lead to condensation, an undesirable condition in buildings.

Water Vapor: Movement Into and Out of Buildings

Commonly known as humidity, water vapor is always present in the air. It is generated within a building by equipment, human breathing and perspiration, cooking and washing, and moisture in the ground.

Water vapor has the tendency to move from high to low-pressure areas, typically from inside of a building to the outside a building. It is capable of passing through most building materials.

During the summer months, the outside air is typically warmer than inside a building, and for that reason, water vapor may penetrate to the inside of a building.

Condensation can damage almost any portion of a building and, therefore, water vapor must be prevented from penetrating materials.

This can be achieved either through the use of vapor barriers or by allowing the vapor to escape before condensing, through ventilation.

This is particularly important in extreme climates where significant differential temperatures exist between the interior and exterior of a building.

Vapor barriers are materials that prevent the passage of water vapor. They are made from aluminum foil, various types of sheet plastic or asphalt saturated felt.

Because moisture forms on the cool side of materials, vapor barriers are installed on the warm side, generally the room side of a wall, beneath the finish material.

Surface condensation of glass can be controlled through the use of insulating glass. Adding a second layer of glazing can help improve thermal quality of windows where condensation is present.

Additionally, proper caulking and weatherstripping around window openings is also critical in the prevention of moisture penetration.

In addition to window openings, other building components that are susceptible to moisture infiltration include openings around doors, electrical outlets, sill plates, and top plates.

Proper ventilation in spaces that are susceptible to humidity can help prevent the formation of moisture in the first place. This preventive measure can help reduce the demands on other systems.

Condensation in attics and crawl spaces, for example, can be controlled through ventilation. In turn, this allows for diffusion through materials and through cracks and holes in the building construction.

Providing good drainage through the use of gutters, downspouts, and overhangs to divert water can be beneficial as well. Additionally, covering the floor of crawl spaces with polyethylene film can also help prevent moisture penetration.

What is an Acceptable Moisture Level in Walls?

These include the types of materials used in the wall, ambient temperature, and relative humidity, a measure of the maximum temperature air can hold before it starts to condense into water.

The most susceptible materials in wall construction to moisture are wood and drywall. Ideally, drywall should have a moisture content of less than one percent. Wood is a bit more tricky, but the goal is to maintain a moisture balance relative to the surrounding humidity in the air.

If the relative humidity in a space is under 50 percent, say 40 to 45 percent with an air temperature between 75-85 degrees Fahrenheit, the ideal humidity for wood would be between 7 percent and 8 percent.

In coastal areas where moisture is more prevalent and relative humidity might be anywhere between 58 and 63 percent, however, that ideal moisture percentage is going to be closer to 11 percent for an indoor environment assuming the same ambient air temperature.

In short, to determine the ideal moisture level, you’ll need to know the ambient (dry bulb) temperature and relative humidity. Relative humidity can be measured using a thermo-hygrometer. To measure the humidity in materials such as gypsum board (drywall) and wood, a moisture meter can be used.

Preventing condensation is critical in buildings. When moisture penetrates the building envelope, whether through walls, roofs, or any openings within these structures, it can cause immediate and long term damage.

Vapor barriers, area ventilation, and glass insulation are methods used to prevent condensation. At windows and other openings, proper weatherstripping and caulking are effective ways to prevent air and moisture penetration.

Indoor appliance use can also play a role in the production of moisture and condensation. Cooking, washing and indoor physical activity all contribute to humidity in a home.

Ideally, moisture levels in buildings should be maintained at less than 50 percent. The materials used in the construction of a building can have a significant impact as can geographic location.