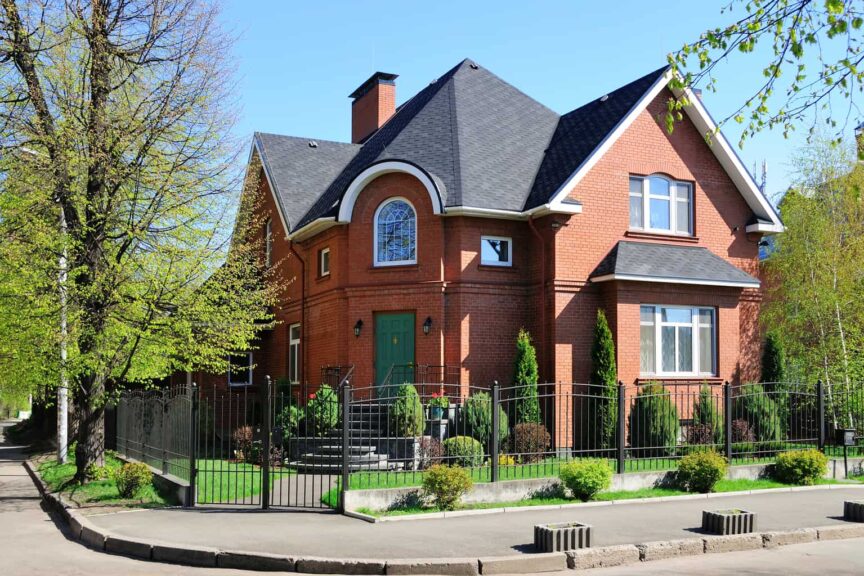 Studs are widely viewed as a crucial component of a structurally-sound wall. After all, they’re able to provide most of the vertical support a house needs at minimal costs. However, are they always necessary or present in a brick house?

Not every brick home has studs, but most do, as their walls need them to ensure structural support, especially for larger builds. However, you can find some smaller or older walls that don’t implement studs at all.

Additionally, the way these components are placed and framed can widely vary from one build to another, which is why finding them can often present a challenge even if they’re present. For this reason, in the following sections, I’ll take you through not only the purpose and type of studs you can expect to find in a brick wall but also how to find them as quickly and easily as possible.

Why Do Brick Homes Need Studs?

Now that you know studs are more often than not a necessity when it comes to building a house, you might be wondering what the reason behind their importance is when building a brick house.

Brick homes are built with studs because they carry most of the vertical load their structure has to support. They maintain your build’s overall shape, and they hold up its drywall, windows, doors, sheathing, and much more.

As you can see, as long as you want a decently-sized brick wall to stay upright and support any additional components, you’ll have to equip it with high-quality studs. Furthermore, even the majority of electrical boxes you can find on the market today need to be attached to a stud, meaning that your utilities also depend on the presence of these structures.

Those wanting to learn more about the importance of studs and the functions they play in a house’s structure, and amenities might want to give this guide a read.

However, there are a few exceptions to the general rule previously described. Although studs are usually considered a crucial component of any brick wall, there are some instances where you might be able to find a structurally sound home that doesn’t rely on them for support.

Technically speaking, some smaller structures don’t need a support system at all due to their insignificant weight and lack of design intricacies. However, when it comes to a project such as a house, this is unlikely to be the case.

In homes, brick walls are also often built using concrete block or CMU. This type of construction does not rely on studs since the CMU blocks provide adequate vertical support without the need for studs. However, while interior walls can also be built with CMU block, oftentimes studs are used on interior walls, creating a hybrid structural system.

Types of Wall Studs in a Brick Home

When trying to locate studs on your brick wall, it’s crucial to know what the structure you’re looking for looks like. Having the right information will make the process much less stressful and time-consuming. Luckily, there are only two types of studs you’ll have to look out for.

If your build is a more budget-friendly project, chances are it incorporates wall studs. They’re often a favorite among construction companies as they’re durable, flexible, accessible, and most importantly, affordable. They’re also highly customizable and come in various lengths and sizes.

They’re usually placed perpendicularly to your wall (you’ll rarely come across horizontal studs) to allow for adequate room and support for your wires and pipes. You’ll find them fixed between two board plates placed horizontally that give your stud additional stability and durability. The components are usually fixed together through the use of nails.

You’ll usually find them placed on average about 20 inches (50.8 cm) apart. Although the specific distance can vary a bit depending on your build, it always needs to allow enough room to accommodate any possible drywall, sheathing, or other materials to comfortably sit in between.

Although less common, steel wall studs are being incorporated more and more into home building projects as time goes by. They offer many advantages compared to their wood counterparts, as they’re lighter and more durable. Not to mention that steel is also longer-lasting, as it isn’t as easily affected by humidity or bacterial growth.

However, they haven’t quite made it into the mainstream market yet because they’re still too expensive for construction companies to use on a regular basis. Additionally, they can be more challenging to handle and install.

Still, if you’re residing on a newer, costlier build, you might have to look for a steel wall support structure rather than a wooden one.

How To Find a Wall Stud in a Brick House

Although upon a first inspection, it might seem like your house doesn’t have studs at all, chances are you simply haven’t been able to find them yet. Locating these support structures is hard as is, but it becomes even more challenging when trying to do so through a 4 inch (10.16 cm) brick wall.

Therefore, if you’re looking to hang a heavy decor piece to elevate the look of your rustic brick walls, you’ll want to follow these simple steps first to locate your studs.

Keep in mind that you’ll likely need a stud finder throughout this process. The Franklin Sensors Stud Finder (available on Amazon.com) is lightweight, accurate, and will efficiently run on a single charge for hours on end.

All you need to do is:

Although most brick homes have studs, some older and smaller builds have other kinds of support structures instead. Finding these support structures, whether they be studs, wood panels, or another kind of material, doesn’t have to be hard or time-consuming as long as you follow a few simple steps.