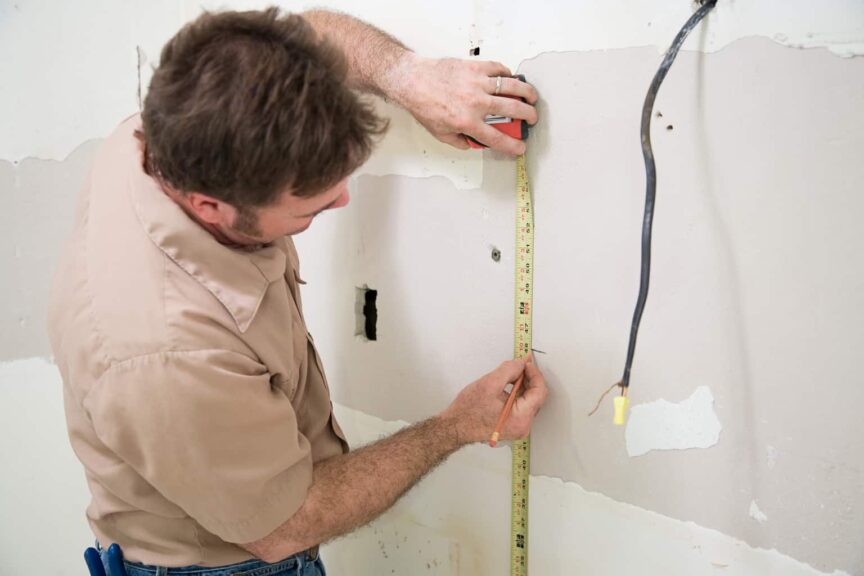 Cutting into drywall to create an opening comes with its challenges. The last thing you want to do is cut into the studs located behind the gypsum board. Drywall is usually layered over wood studs or beams that are used to support the drywall, and it can get tricky to remove this layer without damaging the studs.

There are two steps to prevent cutting the studs behind the drywall. The first is to identify exactly where the studs are located and then work carefully around them. The second step is to manually cut the surface little by little, using a utility knife or jab saw to avoid cutting too deep and too quickly.

In order to identify the location of studs, you can look for hints on where they may be located. If there are no visible signs, you can try the knocking method to identify hollow vs. solid sounding areas. You can also use a stud finder to locate the studs.

Once you identify their location, you can then cut the surface with a utility knife using a straight surface to make sure your cut is straight and as clean as possible. Measuring and marking the location of the studs with a pencil also helps increase accuracy.

As you can see, the process of cutting drywall and avoiding damage to the studs need not be complicated. All it takes is some initial planning and patience to create the opening manually. Let’s dive deeper into how to cut drywall and fix it onto studs and how to remove drywall from a wall.

1. Cut Drywall According to Measurements and Fix Onto the Studs

This method is for when you need to attach the drywall to the studs that are placed along a wall. To do so, you’ll need to measure carefully and follow these steps:

First, you want to run a measuring tape across the surface of the wall and studs to determine the width of the drywall. Start measuring from the edge of the last sheet of drywall and take the tape up to the adjoining stud. Then, mark the center of this stud.

Take the exact measurements along the top and bottom lengths along which the drywall will run. By measuring again, you can ensure that the size is equivalent at all levels.

In some cases, parts of the stud may be warped, and equal measurements will ensure that you cut the proper width of drywall to fit the gap. Otherwise, you may end up with a sheet of drywall that doesn’t meet the stud in certain places.

Take these measurements and transfer them onto the sheet of drywall. You can mark the lines using a black marker.

Use a Utility Knife

Use a utility knife to cut through the face of the drywall, as this will allow you to apply ample pressure without damaging the drywall. If you’re looking for a utility knife, a good choice is the REXBETI 2-Pack Utility Knife from Amazon.com. It is ultra-sharp, double-hardened, and comes with extra blades included.

It’s best to use a wooden ruler or carpenter’s square to make the incision, and so you continue cutting in a straight line.

You will need to make several passes with the utility knife to ensure the drywall is appropriately cut into. Make sure you cut into at least half the thickness of the drywall sheet.

Snap off the Drywall

If you’ve measured correctly, you should have a proper fit. Use screws to fix the drywall onto the studs.

Some people place the drywall sheet against the studs and use the studs as a measurement to cut the sheet accordingly. This method increases the risk of cutting into the studs, so it’s best to avoid it.

2. Cut Out Drywall and Remove It From the Wall

It’s challenging to separate drywall that has already been fixed onto studs as there’s a higher possibility of damaging the studs if you aren’t careful. Here’s a simplified version of how to safely cut the drywall out of a wall.

Before you cut anything, use a utility knife and make a few passes along the top of the wall, where the drywall meets the ceiling. In most cases, drywall is attached to the ceiling with some adhesive or binding material.

Making cuts along this line ensures that your ceiling isn’t damaged when removing the drywall. Once you’ve safeguarded your ceiling, you can focus on the drywall, here’s how to go about cutting.

Use a Handsaw to Cut Through

Locate a spot without any beams or circuits behind it. Once you’ve done so, press the blade of a handsaw into the wall. Then, use your palm to push the saw into the drywall gently.

When the blade cuts through the drywall, begin sawing in a gentle to and fro motion. You want to ensure that your blade isn’t perpendicular to the wall but at a flattened angle instead. This way, you’ll feel a slight bump as soon as the blade comes in contact with any stud behind it.

If you feel a stud, angle the saw away from you further and continue cutting till you pass the stud. Cut slowly but firmly, not aggressively.

Ideally, you want to switch off the electricity prior to cutting into any portion of the drywall. This precaution will ensure that you avoid sawing into a circuit which could lead to accidents.

When you’ve cut into the portion you would like to remove, unscrew any plugins in the wall to avoid damage during removal.

Now that you’ve cut a line through the drywall, it’s time to get it off. Insert a thin, flat bar into the gap on your drywall and pry the wall open.

Do not insert your fingers into this space, as the drywall could snap shut when removing the bar. Instead, insert the ‘claw’ portion of a hammer into this gap and gently pull it until the wall opens further.

Once the drywall has been pried open and loosens its hold on the studs, you can use your hands to pull the entire sheet off. In most cases, drywall will not readily come off the studs, and you’ll have to be content with removing chunks of it at a time.

If you’re planning on taking out only a portion of the drywall, you’ll need to draw out your measurements on the wall before cutting it out using the same technique.

It’s pretty straightforward to remove drywall from the interiors of your home, and with the right tools and enough patience, you can get off without too much trouble.

What’s most important is to plan ahead so that you can identify the location of any framing behind the sheetrock. This step, along with taking a manual approach to cutting the opening can help you get the job done successfully.