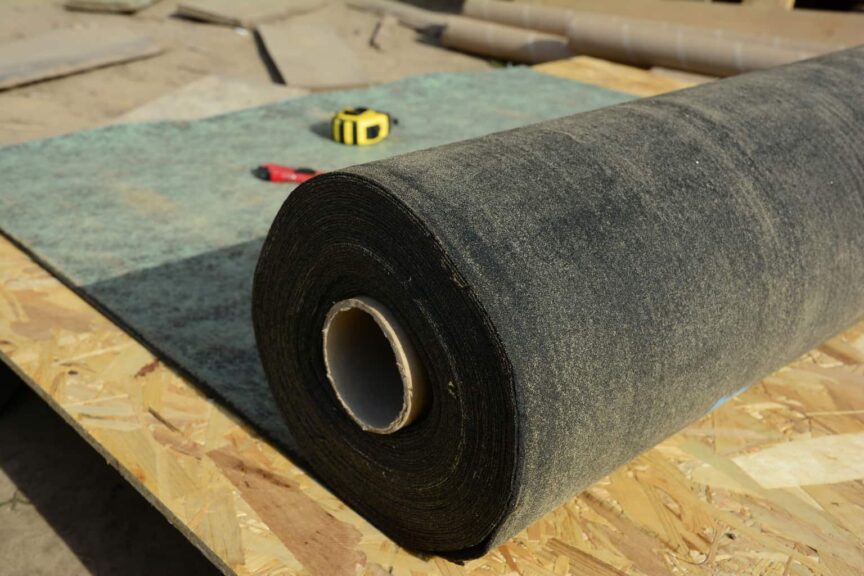 Roofing felt is used to form a waterproof seal over the wooden structure and beneath the shingles or tiles of your roof. However, some people have concerns when it comes to using roofing felt. They wonder if roofing felt is toxic or safe.

Roofing felt is not toxic under normal conditions. However, it contains harmful chemicals that may be released during installation. Also, when roofing felt is heated or burned, harmful fumes are released, damaging lungs and linked with some forms of cancer.

Keep reading to learn more in detail about the dangers involved in using roofing felt. I’ll explore the methods used to install roofing felt, the risks involved, and where it obtained its reputation as a harmful building material.

Is Roofing Felt Toxic When Heated?

Roofing felt is applied in multiple layers when added to the roof of a house. These layers are required to meet building codes and ensure that your roof has an effective waterproof layer protecting your home.

Roofing felt can become toxic when heated. A harmful gas known as hydrogen sulfide is released, although in small doses unlikely to cause harm. Nevertheless, fumes released from hot roofing felt may cause irritation to the lungs.

There’s no link to the chemicals released from roofing tar and forms of cancer. However, roofing felt contains asphalt. Asphalt workers have been shown to be at increased risk to certain varieties of cancers, although there’s no direct causation found yet.

Therefore it’s best to exercise caution when around heated roofing felt, but don’t worry too much about the fumes released. Especially if the roofing felt is in a well-ventilated or outdoor space, like your roof.

Can You Install Roofing Felt Without Heat?

You can install roofing felt without heat. Roofers roll it out over your roof, covering the entire area. Then they hold the felt in place with clips, staples, and roofing nails to prevent it from moving. This method removes the risks involved in torch-on roofing felt that requires burning.

Roofing felt does not need to be burned to remain in position. Instead, people choose torch on roofing felt for the added performance, not because of necessity. However, you can eliminate the risk of your roof catching fire or inhaling toxic fumes by choosing to clip your roofing felt in place.

Asbestos isn’t commonly used on any modern materials because it’s toxic. It’s linked to numerous forms of cancer and a host of breathing issues. Tiny fibers of asbestos become airborne. Once inhaled, these tiny fibers remain in your body, causing devastating harm. Therefore, asbestos is no longer used in construction.

Can You Use Roofing Felt Indoors?

Roofing felt is usually a safe material under normal conditions. However, it doesn’t necessarily mean that it’s safe to use roofing felt on indoor surfaces on your property. So can you use roofing felt inside or is this material better suited to the outdoors?

Roofing felt can be used indoors. In fact, roofing felt is commonly used as an underlayment for hardwood floors. It’s an effective waterproof layer that keeps your floor dry while also blocking dust and dirt underneath the flooring.

However, it’s worth noting that some homeowners have reported foul odors coming from the roofing felt underneath the flooring. This happens when homes have underfloor heating or sweltering conditions. Nevertheless, roofing felt can be used safely indoors and regularly is used across the country.

When roofing felt is used indoors, it’s best to hold it in place with screws, clips, and nails, as opposed to heat. Heating roofing felt indoors will produce a foul odor throughout your home. Plus, the released chemicals could build up indoors, resulting in potentially harmful air quality.

If you’re sensitive to chemicals, you should probably avoid roofing felt in indoor areas of your property. Instead, you can use alternative materials for underlayments like red rosin paper. Red rosin paper provides similar results without relying on asphalt or other strong-smelling substances.

Is Roofing Felt Harmful to the Environment?

Roofing felt is safe under normal circumstances and does not produce any toxic fumes to humans. However, the environment can be damaged by many things that cause us little harm. So does roofing felt contribute to climate change, or is it an eco-friendly building material?

Roofing felt is harmful to the environment. Roofing felt contains asphalt, which is derived from crude oil, a fossil fuel. Producing roofing felt and sourcing the materials is damaging to ecosystems. Disposing of roofing felt may also have devastating effects, especially when not handled correctly.

Roofing felt is a very effective waterproof barrier installed beneath the tiles or shingles on your roof. Roofing felt isn’t toxic under normal conditions. However, when heated to high temperatures or burned, it may release harmful chemicals.

Roofing felt once contained asbestos, which is a fatal carcinogenic material once commonly used in construction. However, in recent decades, asbestos has been banned and replaced with other materials. Modern roofing felt is safe and can even be used indoors on your property.