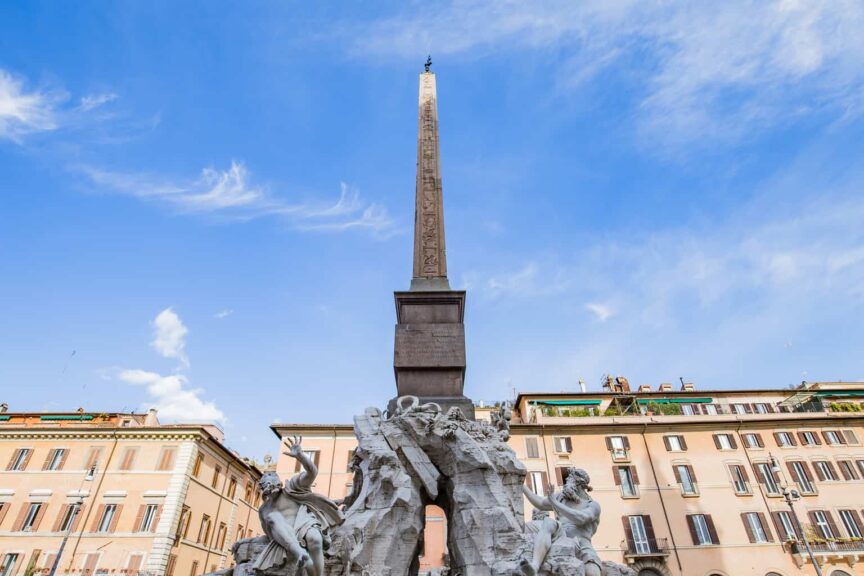 The buildings we see around us all began as mere conceptual elements before they took form and became habitable structures. Architectural form is derived from 4 basic elements that are further elaborated until they begin to take form and serve as reference points for the three-dimensional spaces that we inhabit.

The 4 primary elements of architecture include the point, line, plane, and volume. The order of these elements represents the transformation from a single point to a one-dimensional line, from a line to a two-dimensional plane, and finally, from a plane to a three-dimensional volume.

Each element is conceptual at the beginning – it exists only in the mind’s eye – but eventually it becomes a visual element in the vocabulary of architectural design. We can sense a point when two lines meet, a line within the edge of a plane, a plane as a volume enclosure, and the volume created by an object that occupies space. Continue reading as we explore these 4 elements in more detail.

A point is the prime element in the vocabulary of form. From a conceptual standpoint, it has neither width, length, or depth. Its purpose is to mark a position in space, such as:

Since it lacks form or shape, it can only make itself felt when placed within a field. At the center of its environment, a point is stable at rest. It serves to organize surrounding elements about itself and dominates its field.

When the point is moved off-center, however, it begins to compete for visual dominance and its field becomes more aggressive. In this scenario, visual tension forms between the point and visual field.

Because a point lacks dimension, it must be projected vertically into a linear form to mark a position on the ground plane or space. An example would be a column, obelisk, or a tower. When seen in plan view, these columnar elements retain the characteristics of a point. Other point-generated forms that have similar attributes include:

Two points give a line finite length and describe it. The line can also be considered a segment of an infinitely long path. Two points further suggest an axis perpendicular to the line they describe and about which they are symmetrical.

Two points established in space by a column or centralized forms can define an axis, an ordering device used throughout history to organize building forms and spaces. In plan, two points can denote a gateway signifying passage from one place to another.

An extended point becomes a line. Conceptually, a line has length but no width or depth. Unlike a point, however, a line is capable of visually expressing direction, movement, and growth by describing the path of a point in motion.

A line is an important element in the formation of any visual construction. It can serve to:

While a line theoretically has only one dimension, it has to have some degree of thickness to become visible. It’s seen as a line simply because it’s length dominates its width. The length-width ratio determines the character of a line. It can be bold or tentative, graceful or ragged, and taught or limp depending on our perception of its length-width ratio.

The orientation of a line can also affect its role in a visual construction. A vertical line for example can express a state of equilibrium with the force of gravity. On the other hand, a horizontal line can represent stability, the ground plane, or the horizon. An oblique line is a deviation from the vertical or horizontal. It can be perceived as a vertical line falling or a horizontal line rising. It is dynamic and visually active in its unbalanced state.

Linear members that have the necessary material strength can perform structural functions. They can express movement across space, provide support for an overhead plane, or form a three-dimensional structural frame for architectural space.

A line doesn’t have to be visible in architecture, it can be an imagined element. For example, it can be established by an axis – a regulating line formed by two distinct points in space about which elements are symmetrically arranged.

While architectural space exists in three dimensions, it can be linear in form to accommodate the path of movement through a building and link its spaces to one another. Buildings can also be linear in form, especially when they consist of repetitive spaces organized around a circulation path.

At a smaller scale, lines help articulate the edges of planes and volumes as well as their surfaces. Joints within or between building materials, frames around openings such as doors and windows, and structural column grids are all expressed by lines. The texture of a surface is also determined by the the visual weight, spacing, and direction of the linear elements.

Two parallel lines have the ability to visually describe a plane. The closer the lines are to one another the stronger the sense of plane they convey. A series of parallel lines, through their repetitiveness, reinforces our perception of the plane they describe. As these lines extend along the plane, the implied plane becomes real and the original voids between the lines revert to being simply interruptions of the planar surface.

A real-life example of this would be a row of columns in a linear sequence. A row of columns can effectively be viewed as a wall surface that is open and has been discontinued in several places, as Italian Renaissance architect Leon Battista Alberti observed. A colonnaded facade can be entered into. It also offers some shelter from the elements and forms a semi-transparent screen that helps unifiy the building forms behind it.

Columns can articulate the edges and boundaries of an exterior space as well as an interior space defined within the mass of a building. When exterior, they define and enclose outdoor spaces while at the same time allowing the sun and wind to penetrate.

When combined, vertical and horizontal linear elements can define a volume of space. The form of the volume is determined entirely by the configuration of the linear elements. The size, shape, color, texture of a plane – as well as its spatial relationship to other planes – determine the visual attributes of the form and define the qualities of the space that they enclose.

In architectural design, there are three generic types of planes used:

The overhead plane can be the roof plane that shelters the interior spaces of a building from the climate or it can be a ceiling plan that forms the upper enclosing surface of a room.

Because of its vertical orientation, the wall plane is active in our field of vision and shapes the enclosure of architectural space.

A base plane can be either the ground plane that serves as the foundation and visual base for buildings, or the floor plane that forms the lower enclosing surface of a room.

The ground plane supports all architectural construction. Its topographical character influences the form of the building that rises from it. The building can either merge with the ground plane or rest on it. It can also be elevated above it. The ground plane itself can be manipulated as well to establish a podium for a building form.

As a design element, the plane of an exterior wall can be articulated as the front or primary facade of a building. In urban settings, these facades serve as walls that define plazas, streets, squares, marketplaces, as well as other public outdoor spaces.

Ceiling planes are unique in that they are almost always a purely visual event in a space. We walk on floors and have visual contact with walls, however, the ceiling plane is usually out of reach. It may be the underside of an overhead floor or roof plane and spans between its supports, or it may be suspended as the upper enclosing surface of a room.

The ceiling plane can be raised or lowered when designing a space and this alters the scale of a room. It can also be manipulated to control the quality and quantity of light or space within a room. If it varies in shape and elevation, it can be used to define spatial zones within a room as well.

The roof plane functions as the essential sheltering element in a building and protects it from the exterior elements. Depending on its functional requirements, it may slope only slightly or it may have a steep slope depending on the external environmental requirements such as shedding rain or melting snow. A roof plane can also extend outward beyond the exterior walls to form overhangs, providing protection from sun or rain for doors and windows.

A plane that is projected in a direction that is not its natural, intrinsic direction becomes a volume. Conceptually a volume has 3 dimensions: length, width and depth. All volumes consist of:

Form is the primary characteristic that identifies a volume. The shapes and interrelationships of the planes that describe the boundaries of the plane create the form that defines the volume. As a three-dimensional element, a volume can be either a solid or a void. If a solid, it is displaced by mass. If a void, it is contained or enclosed by planes.

In architecture, a volume can be either a portion of a space contained and defined by walls, the floor, and ceiling or roof planes or a quantity of space displaced by the mass of a building. Building forms that stand as objects in the landscape can be perceived as occupying volume in space. Building forms that serve as containers can be read as masses that define volumes of space. An example of this would be a series of buildings in an urban square.

Primary elements in architecture are more conceptual than anything else. They mainly exist in the mind’s eye, in particular that of the designer in the early conceptual stages. However, these elements inevitably end up expressed in form and can be perceived when experiencing the interior spaces of a building as well as its exterior facade and its relationship to its surroundings.

These basic elements are used as a starting point to create elaborate forms that serve both functional purposes and aesthetic qualities that give a building its unique character. When made visible to the eye on paper or in three-dimensional space, these elements become the characteristics of substance, shape, size, color and texture in architecture.