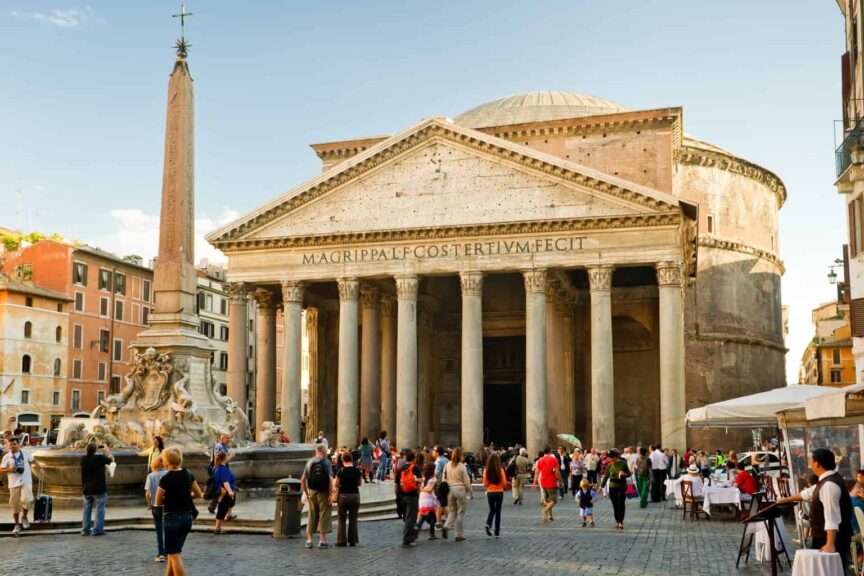 Circulation in architecture refers to the way people move throughout a building, and how they interact with the physical space around them. Circulation also occurs prior to entering a building, as people approach a structure.

While people by nature ultimately decide which way they chose to go, their behavior can and often is, determined by the form and layout of the spaces within a building. There are certain specific elements that exist in all building circulation patterns.

Next, we’ll take a look at the elements that define circulation within, as well as during the approach towards and into a building. These five elements include:

The approach to a building is the first layer of circulation. A building can be approached either directly towards it (frontal), or at an oblique angle.

A frontal approach is the most formal type of approach. The approach is direct along a straight axis towards the entrance of the building. Usually along the front facade of the structure.

An oblique approach can also be directed towards the front of the building. However, the approach is at an angle rather than directly perpendicular. This enhances the perspective of the structure.

Because the approach is not direct, the entrance may often times not be immediately discernible. For this reason, oftentimes a more elaborate or projected entrance structure is used for orientation.

An entrance into a building or room marks the transition from one space to another. The most traditional way of providing an entrance is through an opening within a plane.

However, an entrance can be more subtly expressed by the use of two columns or by pillars within a beam overhead. An entrance can even be expressed with a change in level to mark the transition from one space to another.

A traditional opening to express passage can either be flush to the plane of penetration, or it can be either projected or recessed. If projected, the entrance announces passage prior to penetrating the opening. If recessed, the entrance absorbs part of the exterior into the building internal space. Both also provide overhead shelter.

An entrance can be centered along the plane of entry or it can be offset from center to create a more dynamic composition. It can also be further reinforced by making it wider, narrower, taller, or shorter than anticipated. It can be made deeper or circuitous for visual enhancement. Ornamentation can also be used to further distinguish the opening.

By nature, all paths are linear. However, a path can also be segmented, curvilinear, intersect or branch to other paths, or it can form a loop.

A path can be radial, with multiple paths culminating at, or extending from, a shared central point. It can also be a continuous path that revolves around a central point, in the form of a spiral.

Another possible path configuration is a grid. A grid is formed by two sets of parallel paths that intersect at regular intervals. A series of paths can also connect at specific points of intersection and from a network.

Finally, paths can be a composite configuration, made up of various patterns. It’s important when designing a composite layout to create a hierarchical order by using a differentiating scale, length, form, and placement.

Paths also inherently related to the spaces they link to. They do so in three distinct ways: They either pass by spaces, pass through spaces, or they terminate in a space.

When paths pass by spaces, they do so independently of the spaces. That is, they do not affect the form or program within the spaces. The path configuration is flexible in such cases.

When a path passes through a space or series of spaces, on the other hand, it does affect the internal circulation of the physical shape of the space or spaces. By cutting through a space, a path creates movement and points of rest within the space.

A path can also terminate in a space. The path, in this instance, is established by the location of the space itself. This configuration is common in symbolically important spaces, such as monuments for example.

Form of the Circulation Space

Circulation within a space does not happen in isolation. Rather, the space around it can have an impact on how people move around. The form of the space, it’s scale, how the boundaries are defined, how entrances open onto it, and changes in level, can all influence circulation patterns.

Additionally, the height and width of a circulation space can be manipulated to handle the volume of circulation as well as the functional use of the space: a public hall versus a private corridor, for example.

A narrower, more enclosed path, tends to encourage forward movement in a linear fashion. On the other hand, very wide and tall spaces tend to encourage more random movement without form and definition.

Changes in level, in particular stairs and stairways, also affect circulation in a vertical fashion. The size and proportion of the stair or stairway, how enclosed or open it is, and the slope and size of its treads or risers, can all have an impact on how private or welcoming it is for its users and intended function.

Our path of movement through buildings is what links different spaces together. When circulation occurs in a building, it is a combination of the natural tendency of people to move in one direction or another.

At the same time, the physical layout and design of circulation elements, whether a stair, corridor, outdoor path, or a series of spaces of varying size and scale can impact the way people move throughout.

This symbiotic relationship between the building structure and the people who move throughout and experience its unique characteristics is what creates the dynamic flow that we refer to as circulation in architecture.