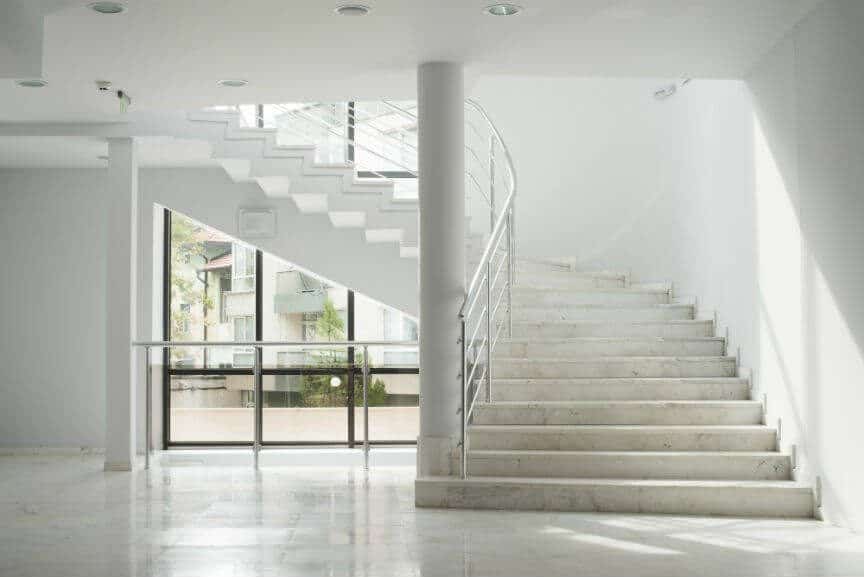 It is often said that architecture is the combination of space and form. Space encompasses the volume of a structure, the parts of a building we move through and experience. But space can only be created through the use of form. Form is the mass, or grouping of materials, used to give a building its shape.

Another way to look at this is in terms of positive and negative space. Positive space has mass. It can be an enclosure or solid boundary with a specific shape. The area in between, which has no visible mass, is what we refer to as space. Architecture occurs at the point where form and space come together.

While technically space exists outside the boundary of a building, in architecture the focus is primarily on the enclosed area. However, the relationship between a building and its surrounding is nonetheless a critical part of design. In the context of its surroundings, a building serves to define space relative to the structures or outdoor spaces around it.

For the most part, however, we will be focusing on internal enclosure when referencing space. We’ll take a look next at the primary types of shapes and solids that define space as well as the various ways they can be configured to create living spaces.

The most fundamental horizontal shape used in architecture is the plane. A rectangular base plane with four edges and corners is all that is required to define space in an open field. A circular base plan can accomplish the same with a single edge and no corners. Neither requires thickness, only a change in texture, tone or color to define its shape.

When elevated overhead, a plane creates a sense of enclosure beneath it. It defines a field of space between itself and the ground plane. This spatial definition can be further articulated with the use of columns or posts. Another way of reinforcing the spatial definition is by turning the edges of the overhead plane downward or, alternatively, articulating the edges of the ground plane with a change in level.

Vertical linear elements define the perpendicular edges of a volume of space and include things like columns or posts. This is the most elemental form used to articulate a vertical boundary.

A single vertical plane can also articulate the space which it fronts. The best example is a single wall, either in a building structure or landscape, such as a retaining wall. By adding a second vertical element, an L-shaped plane can be achieved if both planes meet at a corner.

If, on the other hand, two planes are separated from one another along the same axis, they form parallel planes which define space axially. When a third plane is added, so that each plane meets at a corner, a U-shaped plane is achieved. In such a configuration, space is defined toward the open end of the configuration.

Finally, four planes that meet at corners create an enclosure. This is the most common use of vertical planes we see in architecture. Rooms within a building are typically configured with four planes. This assortment establishes boundaries of an introverted space. It also influences the field of space around the enclosure.

Perhaps the most common typology used in architecture, an enclosure with four vertical planes creates a strong spatial definition with an inward focus. If one of the planes is to be dominant, it is usually articulated with either size, form, surface articulation or by the nature of the openings within it.

Closure in architecture can be found at varying scales, from a large public square to an interior courtyard or single room within a building. The enclosing planes may be walls or fences or in an urban context, it can also be a series of buildings that create an arcade or gallery spaces.

Just as closure defines a space, so do openings in the form of doors or windows. Doors provide entry into a room and dictate the patterns of movement within it. Windows allow light to penetrate into the space and offer a visual connection with the exterior.

While openings provide continuity within adjacent spaces and the exterior, they can also begin to weaken the sense of enclosure, depending on their size and scale. They also affect orientation and flow within a space, as well as the quality of light, views, and patterns of use.

Openings regulate the amount of light that enters a space based on their size and orientation. Openings can receive direct sunlight or they can be treated with shading devices to allow light in, but diminish the undesired effect of heat gain and glare.

An opening can also be oriented such that it does not receive direct sun exposure, but rather diffuse, ambient light from the sky vault overhead. An opening that is fully enclosed within a plane will create a more harsh contrast between light and shadow.

On the other hand, a corner opening results in a softer contrast since the light that enters is washed out by the adjacent surface of the wall plane. The shape and articulation of the opening can also have an effect on the natural light that enters. It can create shadow patterns along the surfaces of walls, giving a space more character.

Openings also regulate the connection between one space and another or the exterior field of view. Small openings within a vertical plane help frame a view so that the viewer only sees a hint of what lies beyond.

On the other hand, a larger opening opens up a room to a broad vista. Bay windows go a step further, projecting a person into a scene. A full height glass window connects the occupants of a space with the environment beyond, creating continuity between the inside and outside of a building.

The positioning of openings provides orientation. A window located in the corner of a room can give a space diagonal orientation. Openings can also be oriented towards the top of a plane to allow the onlooker to see only the tops of trees. Conversely, openings can be located low to frame a garden and vegetation on the outside.