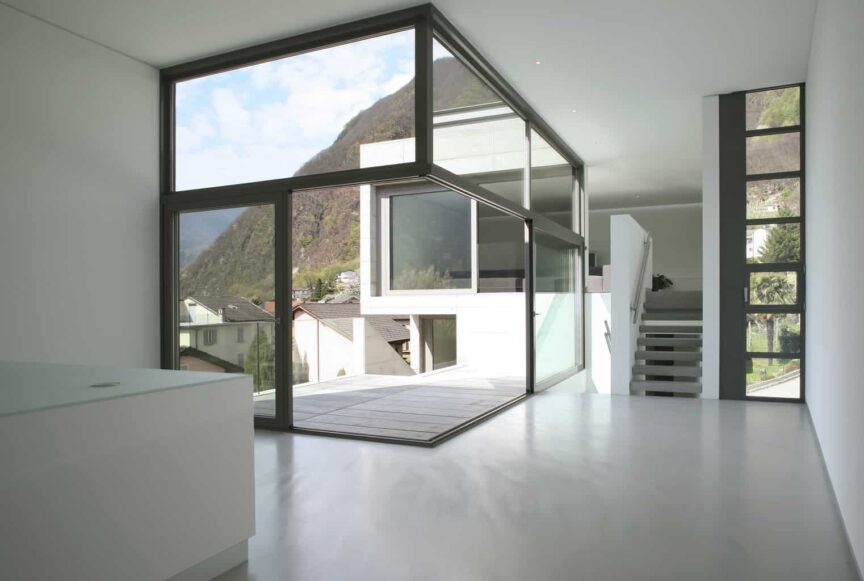 Organization of space in architecture is fundamental to the creation of composition. It brings together different forms and shapes and provides a cohesive structure to the design.

In addition to these spatial relationships, there are various types of organizational approaches used in the design of buildings. Spatial organizations help unite an array of otherwise disparate shapes. Common methods of spatial organization include:

These organizational methods can be found in architecture throughout all ages. From the time of ancient civilizations to modern architectural design, these compositional techniques have withstood the test of time. Let’s now take a look at each of these concepts in more detail, starting with spatial relationships.

Space Within a Space

In order for this spatial relationship to be understood, a clear distinction in size is needed between the two spaces. If the contained space were to increase in size, the larger space would begin to lose its impact as an enveloping form.

In order to stand out from the larger form, the smaller space could share the same shape of the envelope, but be oriented differently. It can also differ in form from the enveloping space in order to stand out as a freestanding volume. This contrast in form could indicate either a functional difference between the two spaces or the symbolic importance of the contained space.

An interlocking spatial relationship results from the overlapping of two volumes and the resultant area of shared space. When two spaces interlock their volumes this way, each maintains its identity as a space.

The interlocking area of the two volumes can be equally shared by each space. It can converge with one of the spaces and become an inherent part of its volume. It can also develop its own identity as a space that serves to link the two original spaces.

Adjacency allows each space to be clearly defined and to respond to specific functional or symbolic requirements. The amount of continuity that takes place between two spaces depends on the characteristics of the plane that separates and brings them together at the same time.

The separating plane may restrict the physical or visual connection between two spaces. It may also reinforce the individuality of each space, and help differentiate them.

It can either appear as a freestanding plane in a volume of space or it can be defined with a row of columns. Unlike a solid plane, columns allow a greater degree of visual continuity between two spaces.

A plane may alternatively be implied by a level change or different surface materials or textures between two spaces. This can also be interpreted as individual volumes of space divided into two related zones.

Spaces Linked by a Common Space

Two separate spaces can be linked to each other by a third, intermediate, space. The spatial relationship between the two spaces depends on the qualities of the third space which they share.

If large enough, the intermediate space can become the primary space and arrange about itself a number of spaces. Its shape can also be residual and be determined strictly by the forms of the two spaces being linked.

A central organization is composed of a dominant central space, with secondary spaces grouped around it. As a composition, this arrangement is concentrated and stable.

The central space is usually regular in form and large enough to gather smaller spaces about its perimeter. The secondary spaces may be equal in size or shape in order to create a more balanced composition around the central space.

Alternatively, they may be different from one another in form or size in order to emphasize their unique function or hierarchy. In addition to the relationship between each shape, this arrangement also allows the composition to respond to the surrounding site.

The relationship to its site is important in a centralized composition since it is inherently non-directional. It depends on the site and articulation of one of the smaller volumes to dictate the conditions of entry and access into the central space.

The circulation pattern within a centralized organization can be spiral, radial, or loop in form. In virtually all circumstances, however, the movement pattern will end around a central space.

A linear organization can be composed of a single, unifying element, about which different objects are arranged. These objects may be different in scale, program, and shape.

Alternatively, a linear organization can also be comprised of elements that are uniform and similar in scale, program, and shape. They are linear due to their arrangement in a singular axis, rather than as a result of a dominant unifying linear volume.

Within the linear arrangement, there may be spaces that require articulation due to functional or visual hierarchy. This can be achieved by locating the volumes at the ends of the linear access, offsetting them from the axis, or locating them at points of intersection (pivotal points).

Because of their inherent properties of length and axial continuity, linear organizations express movement and a directional quality.

Radial organizations are effectively a combination of linear and centralized organizations. They have a central focal point from which linear forms radiate from.

The linear forms may be equal in size and form, where they may differ in length or shape. This may be a result of programmatic requirements or it may be a design decision.

When the radiating organizations are regular and symmetrical, the central space gains a greater degree of importance. On the other hand, if certain linear organizations differ in scale or form, it helps to emphasize them in the hierarchical structure of the layout.

Clustered organizations rely on proximity to relate spaces to one another. Often, they consist of repetitive cellular spaces that have certain visual qualities in common.

A clustered organization can have a central focal point or uniting central form, however, it lacks the regularity and symmetry of a centralized organization. The center form can be emphasized to create a greater sense of hierarchy.

Clustered organizations can also have a linear element that organizes the clustered forms. This creates a greater sense of unity and helps articulate certain portions of the composition.

A grid organization is comprised of a 3-dimensional composition of linear reference points. Usually, they are perpendicular from one another, though they need not be.

The continuity and regularity created by the grid gives the composition a strong sense of stability and organization. It helps unite forms of dissimilar shape and scale. Functionally and visually, it helps regulate the orientation of the composition.

Grid patterns can be interrupted at specific locations in order to create hierarchy. This allows for portions of the composition where the grid is disrupted to stand out, giving them a greater sense of importance.