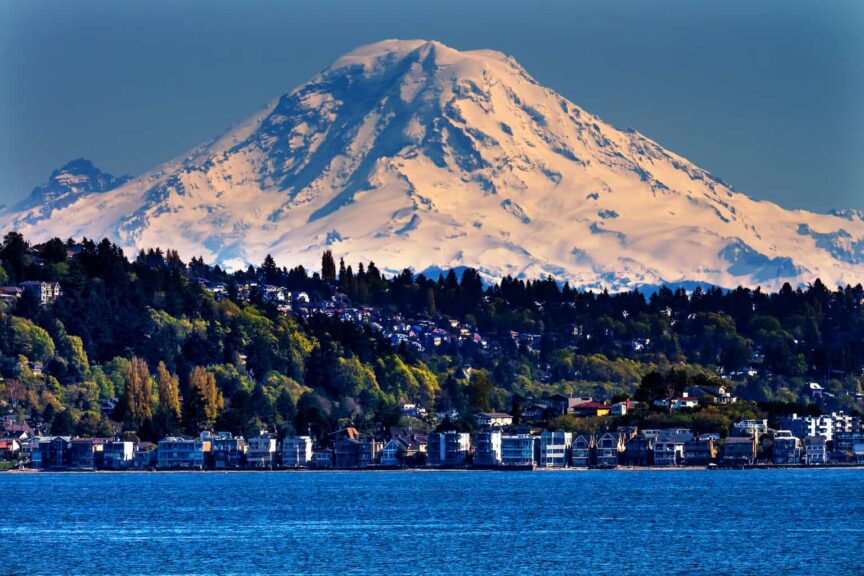 If you live in an area where volcanic activity is a common occurrence, you are aware of the likely damage that such activity can cause to homes. As a designer or builder, what steps can you take to ensure your structures are still standing in the event of an eruption?

Houses are designed to withstand volcanoes by using titanium or tungsten stilts with triple reinforced roofs. However, beyond the lava and heavy downpours of ash, a structure would also have to fight flows of toxic gasses and corrosion to remain undamaged from a volcanic eruption.

The rest of this article will explain a few topics related to this question in great detail, including:

Property damage from volcanic eruptions can be extensive.

When you initially think of volcanic eruptions, the first thing that likely comes to mind is fire damage from lava. However, some of the most damaging aspects of a volcanic eruption on a building result from corrosive ash, flooding, and mudslide damages.

Volcanoes are some of the most potent and damaging natural disasters, mainly because they often trigger a domino effect of other disasters following the explosion. For example, following a volcanic eruption, heavy accumulations of dust and ash descend from the sky and can collapse roofs.

Thus, one of the first things to focus on and protect in the event of a volcanic explosion is your roof from ash compilation. Architects avoid flat roofs because ash is heavy, and if it builds up on a flat roof, the roof will collapse.

However, heavily stooped roofs are also not the answer because ash is also corrosive.

So, the best way to design a roof to withstand a volcanic eruption is by creating it with a smooth, slick surface so that the ash can slide off without collecting on the surface.

Another architectural feature, volcanic resistant designs, have a reinforced structure with titanium. Titanium is a durable and robust material often used for lateral support in buildings that may experience a volcanic eruption.

Or, you may want to build your house on titanium or tungsten stilts. This keeps your home elevated so that if lava, mud, rocks, or flooding occurs, your home will hopefully stand above the downslide without crumbling.

Of course, there is no entirely volcanic-resistant structure.

Volcanic eruptions are massive forces of destruction and often instigate earthquakes and tsunamis. The design features listed in this article may afford your structure some protection from a volcanic eruption, but it may not completely protect it.

What Happens to Buildings During a Volcanic Eruption?

Buildings near flow zones will succumb to lava during a volcanic eruption. If a structure survives the lava flow, it likely will fall to the pyroclastic flows. Establishments far from the lava or pyroclastic flows will probably be damaged from ashfall, corrosion, and winds.

Determining the damage potential to structures resulting from a volcanic eruption has little to do with how close it is to the actual volcano. According to Architecture Revived, the true determiner for potential damage to edifices is their proximity to lava and pyroclastic flow zones.

National Geographic defines pyroclastic flows as rapidly propelled chunks of lava, volcanic ash, and hot gasses that quickly race down in unpredictable patterns down a volcano. Pyroclastic flows are hazardous to living things and structures because they can’t be stopped.

Water doesn’t stop it, and it quickly consumes anything and anyone in its path.

While lava flow is slow enough for people to usually escape, and if buildings were designed on titanium stilts, they can generally withstand the lava as well. However, pyroclastic flows are quick at nearly 200 miles (321.86 km) per second.

These types of flows are especially damaging to the landscape and anything it encounters.

Beyond lava and pyroclastic flows, buildings are also subjected to damage at the hands of heavy ash. Ash is heavier than snow, so if it collects on a building roof or structure, it can collapse the top.

If ash is not removed from building interiors, it can pose a health risk to inhabitants and damage interior finishes. To see more about how ash impacts structures, see this article from Volcanic Ashfall Impacts Working Group.

Other than ash, lava, and pyroclastic flows, your building will also face extreme storms and fierce wind. The storms and winds following a volcanic eruption are strong enough to fling boulders through the air and crush poorly constructed buildings.

There are also the after-effects of a volcanic eruption that your home may not be prepared for. Earthquakes, tsunamis, mudslides, avalanches, and fires are often part of subsequent severe disasters that debut after a volcano.

These disasters can have unprecedented effects on structures and could completely decimate them despite the best design efforts.

How To Protect Your House From Lava

Volcanic ash is still heavier than snow and more toxic.

To combat the heavy ashfall during a volcanic eruption, experts agree that extra roof support is essential. However, avoid designing your roof flat or too complicated in terms of geometrical shapes.

Instead, opt for a smooth roof material with simple geometric layouts and a steep slope. The steep slope combined with a smooth surface will help the ash slide off the roof rather than collect and eventually collapse.

In addition to the ash that falls like a heavy blizzard after a volcanic eruption, extreme winds and subsequent disasters and storms rage after a volcano explodes. One way to protect your home is to have a concrete reinforced building.

Homes built from timber frames are known to fail against the wind and earthquakes that result from a volcanic eruption.

Can You Build a House Using Lava Rocks?

It seems logical: build a house out of the lava to protect it from lava. Right?

Building with lava rock can be a durable construction method to mitigate some damages caused by a volcanic eruption. However, lava rock has some drawbacks, including high cost, technicality, and difficulty in reconstruction efforts.

While some homes in high volcanic activity areas, like Hawaii, have historically used lava rocks to design buildings, some of which are still standing, it isn’t without difficulty. Lava rocks vary in composition, which is the first hurdle to overcome if you want to use this material to build.

Some of it is flimsy and crushable, while other types are heavy and robust.

Using lava rocks to build can also be costly, as this material is heavier than other types of construction materials. Thus it is more expensive to use.

The jury is still out on whether or not lava rocks are optimal for withstanding the effects of a volcanic eruption. However, most data suggest that reinforced concrete is still the best method for maintaining your home in the event of a volcanic explosion.

However, this article from Kaahele Hawaii discusses how this material has successfully been used, and some of those buildings are still standing today.

Living where volcano activity is prevalent or visiting these areas can make us consider how to withstand a volcanic eruption. Truthfully, a volcanic explosion is an incredibly damaging natural disaster.

However, the most important thing about surviving an explosion is protecting human life, not structures.

While some preventative measures can be made when designing a building to prepare for a volcanic eruption, the most important thing to remember is that you and your loved ones should have an evacuation plan in place and an emergency preparation plan.

Then, if your home doesn’t survive, you can rebuild.