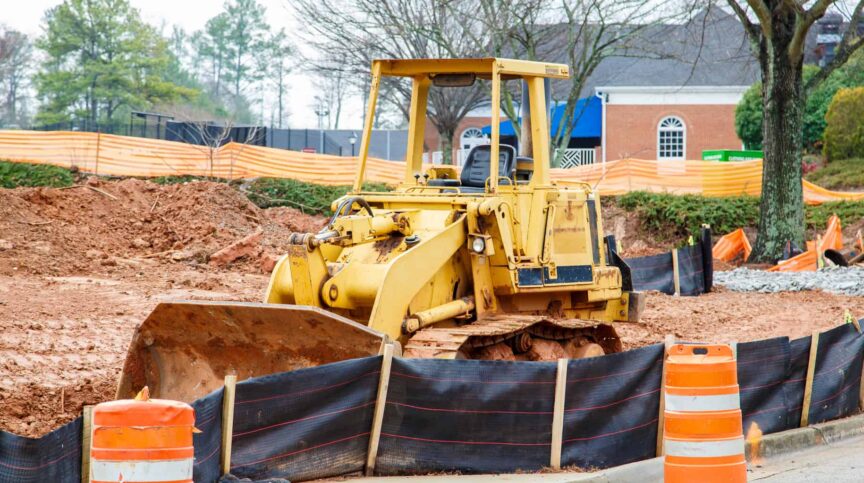 Grading in construction is an engineering process that adjusts the slope and soil elevation around a construction site before building. It entails adding or removing earthen materials to create an even surface and ensure a solid foundation. Successful grading projects require input from engineers.

If looking to build your dream home, you must get the site grading right from the get-go. In this article, you’ll discover all you need to know about successful site grading.

Why Is Site Grading Important?

A good site grading design integrates the existing natural landforms to create a beautiful, functional, and cost-effective site plan. The best site grading schemes trend the line between art and science since they must balance utility and function without disregarding aesthetic appeal.

The shape of the site’s terrain or topography is characterized by contours and spot elevations and is contained in the Topographical Survey.

A competent survey provides re-grading information while identifying existing features, including contour lines and spot elevations. It should also include the site’s outfall elevation information to connect the drainage system if necessary.

Contours are a topographical method that allows engineers to depict three-dimensions on two-dimension media while keeping a uniform scale in all directions. Contour lines identify the areas that correspond to a specific elevation in an area and how they’re interconnected. The shape and spacing of a contour show the interrelationships between the different landforms. Contour lines resemble the shorelines of a waterbody.

Contour interval refers to the vertical distance between two contour lines and indicates a constant elevation change. Since topographic maps are essential to land development projects, the contour interval and details depend on the project and the drawing scale.

Spot elevations identify the precise elevation of a specific location on the map. Their location is marked by an x and is crucial in determining abrupt grade breaks that aren’t easily captured by contour lines.

While engineers may develop design standards based on professional experience, it’s best to refer to the municipality’s land development ordinance. The best design strategy should determine how the existing elevations interact with existing work and the proposed project, such as how a new driveway joins the existing road.

The primary goal of site grading to ensure the stormwater drains away from the site safely and efficiently. Therefore, any grading design must maintain positive drainage, i.e., the water must always flow away from the project.

Once you have the formulas, rules, and regulations in place, you’re assured of a functionally sound site. However, a successful site goes beyond functionality to appeal to the user’s aesthetic sense. The best grading designs can create a series of rolling landforms from a flat, featureless piece of land.

By enhancing the aesthetics and appealing to the uses, a grading design improves user experience and drives the property’s value and demand. The design can hide visually undesirable elements or open a view. The best designs strike a balance between aesthetic and functional roles.

For instance, a landform may provide an on-site solution to disposing of excess soil or may serve as a windbreaker that directs the wind away from a building or outdoor area.

Two legislative laws, the Fair Housing Amendments Act (FHA) and the Americans with Disabilities Act (ADA), influence grading schemes for some sites. Both acts gear towards improving accessibility for people with disabilities.

The FHA act governs multi-family dwelling with four or more housing units while the ADA act focuses on accessibility in commercial buildings and public places.

The Department of Housing and Urban Development (HUD) has adopted some guidelines and standards for FHA accessibility. The HUD guidelines require elevated buildings to have disabled persons accessible entrances unless the terrain or site condition makes it impractical to install them.

Before making a detailed grading plan, the engineer should develop a general grading scheme pinpointing the problem areas and highlight possible limitations posed by the site. The process entails elevation, placing the building, setting the building elevation, parking area, and road grades.

Including the spot elevations and sketching a 2 or 5-foot contour line helps determine the building elevation feasibility. You should check the road and parking area gradient against minimum requirements:

The process may yield several grading schemes, each with its own set of advantages. Weighing the various advantages can help pick the most favorable one.

Refinement of the various schemes through several trials helps to create the final grading plan. During each test, the grades are adjusted to accommodate different building designs, site constraints, earthwork, and preferences.

Creating a grading scheme is an iterative process that begins with plotting spot elevations and proposed contour lines. Addition details are added with each new iteration until the grading scheme achieves the desired outcome.

The goal is to create a plan that adheres to the best drafting principles and is easy to read. The grading scheme can be hand-drawn or digitally produced. Naturally, grading plans for residential and commercial land development projects are vastly different as they have varied goals and objectives and address different factors.

Site grading concepts have been around for many years, with minimal changes. A thorough understanding of these concepts is crucial when grading a site. While software packages such as MicroStation and AutoCAD make it easier to perform many tasks, they deliver the best results when you understand the primary objective.

While software aids in the site grading and design process, it takes a knowledgeable user to churn out an effective grading plan.

Site grading is a crucial process that underlies the success of a new or existing building project. It levels the building site to create a solid foundation for the new building while improving its aesthetic appeal.

Creating a successful grading plan is both a science and an art and calls for exceptional skills and in-depth knowledge of the entire process.