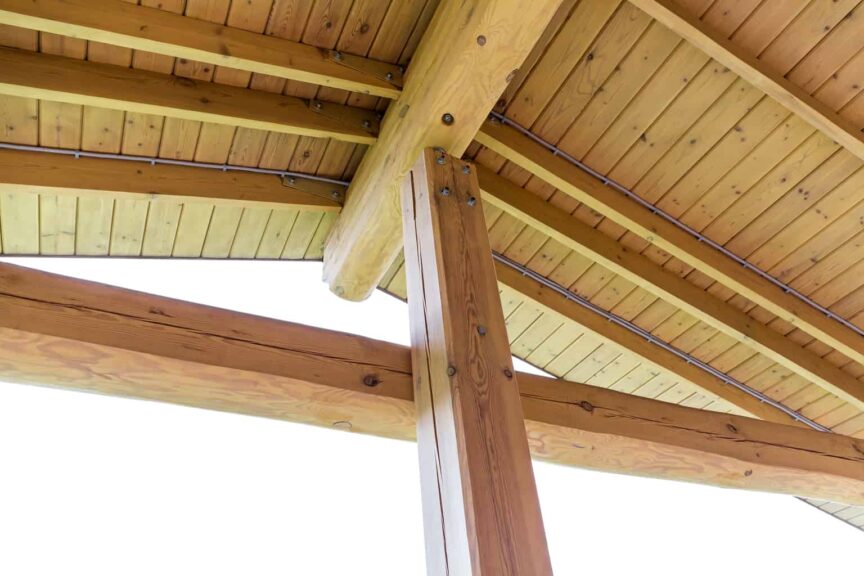 Post and beam construction is a derivative of classic timber frame construction. It uses vertical structures (posts) and horizontal structures (beams) to create a framework that allows for expansive flooring and flexible wall structuring. It gives the building strength and a rustic appearance.

This article will help you understand everything about post and beam construction, including giving you an overview of this construction system and its design considerations. You’ll also learn about the difference and similarities between post and beam and timber frame construction.

If you’ve ever been to a construction site where this type of design is being used, you’ll notice the builders laying a concrete floor, erecting timbers on that floor, and laying other wood members over the vertical ones.

Unlike the dimensional lumber used in light wood framing, post and beam construction uses heavier lumber or structural components. Other materials that can be used as posts and beams include steel and concrete.

This type of construction dates back to the 16th century when timbers were modified manually and joined using hardwood pegs. They were also sometimes joined by removing a part of timber so it can slide over another. These days, however, gusset plates and other mechanical fasteners are used to join adjacent timbers in post and beam construction.

As simple and flexible as the post and beam construction is, it cannot be taken for granted. From the anchoring of the posts to the floor, the connection of the beams to the posts, and the finishing you choose, it’s important that you understand what fits what and how to achieve your desired result.

We all know that any structure’s strength depends, to an extent, on the strength of its foundation. Erecting a building depends on posts and beams because they make up the building’s skeletal part and require a foundation that suits their connection type.

Post and beam construction can be used on any foundation type because of its characteristic point-specific load-bearing nature, mostly at the erected posts. However, other important considerations should be made, such as the pier.

The pier is a concrete structure that holds the post anchor. It is embedded in the foundation and can be of different shapes. The shape of the pier you choose is mostly determined by the type of soil your foundation is laid in.

Generally, circular or round piers are costlier than other pier shapes. However, it costs less when used to improve the rigidity of post and beam construction. Another factor that determines the shape and size of the pier is whether it will be visible or not after the building is completed.

The post anchors can be custom made or generic and are made of steel. Since posts come in square or rectangular shapes, post anchors come in these shapes too. A large part of the post anchor is not visible as they are embedded in the concrete to hold the structure together.

Usually, you can choose if you want the remaining part of your anchor to be visible or concealed.

The floor slab is done in layers. The first layer is made of crushed rocks. The base of the foundation is filled to a shallow level with bits of rocks. After this layer, the rigid insulation is installed, and the slab follows it.

Post and beam construction is so named because of the constituents that make up the structure. The beams need to be attached to the posts to make them stand. Apart from this connection, other connector hardware is used to fasten beams to posts and create a more rigid framework.

Here are some of the fasteners and hardware employed in beam to post connections.

In post and beam construction, the beam to post or beam to beam connection is usually either exposed or concealed.

Concealed connections are made in such a way that they are embedded into the posts or beams. Exposed connectors are just that. They are visible and are left that way mainly because they serve an aesthetic purpose.

Post and beam structures are often mistaken for timber frame construction despite the apparent differences between them. The main difference between these two construction systems is in the connection that exists among their parts.

In timber frame construction, posts and beams are joined using timber joinery. In most cases, the mortise and tenon are held in place with pegs. This design is usually more costly because it requires precision and intensive, highly skilled labor.

In contrast, post and beam construction uses steel pins and steel plates cut in square and rectangular shapes to hold beams and posts together. These pins and plates can either be concealed or exposed. Due to the modified fastening, it requires lesser-skilled labor and also reduced labor cost.

Another difference is that post and beam structures can be built with engineered wood, while timber frames mostly require solid timber. However, current construction practices have seen timber frame structures use engineering wood such as glulams.

Despite the differences in the joinery, they share some similarities in the visual element that gives them their class.

If you look at buildings constructed using the post and beam method or timber frame method, the rustic appearance is what catches the eye. The structures, made of wood, are the basis of both construction types. Also, their skeletal framework, timber upon timber, timber into the wood, is similar.

Post and beam structures are one of the most stable construction systems that exist. If you’re looking to build your new home with posts and beams, it could very well be a great fit. Apart from strength, post and beam construction offers large living space and an open floor area and makes the building more aesthetically pleasing.