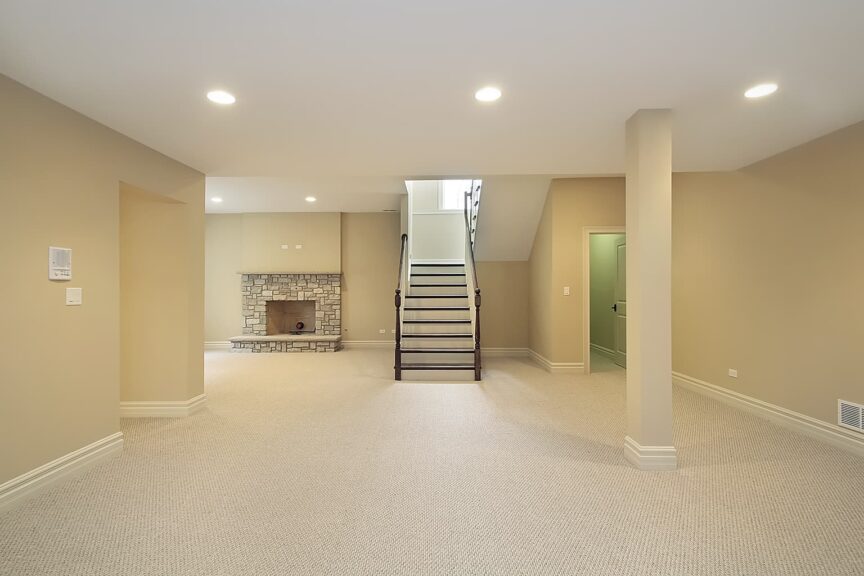 The terms basement and cellar are often used interchangeably, but there are some distinctions between them. They can vary in terms of their use, whether they are finished or unfinished, and perhaps most importantly, whether they are partially or fully submerged.

In other words, a basement is partially underground, up to half of the height of the space from floor to ceiling, while a cellar is anywhere from 50 percent submerged under the earth to fully submerged under grade.

In addition to these distinctions, there are a few other differences in the way the spaces are used and finished. Keep reading as we’ll cover some of these in more detail.

Windows and natural light are important to have in any habitable space. They provide warmth, a connection to the exterior, and a source of essential illumination during daylight hours.

Because a cellar is likely to be further submerged below grade than a basement, there may not be an opportunity for adding glazing. While cellars sometimes do have windows, they tend to be smaller in area than that of basements.

In addition to natural light, windows can also serve a role in allowing for emergency evacuation. Building codes determine the size and area of such openings, and this may limit their use in underground spaces depending on the space type (i.e., basement vs cellar).

When designing your window, you may need to – depending on your location – comply with the International Residential Code (IRC). This code requires that windows have a minimum of 20 inches wide and 24 inches tall. The net clear opening needs to be 5.7 square feet with a maximum sill height of 44″ off the floor.

Oftentimes basements are partially underground and partially above ground. In such cases, or where the earth slopes down to meet the floor slab, it is possible to have a door that leads to the exterior.

However, in the case of cellars, this is rarely possible since they are further submerged below grade. This makes sense from a code perspective as well since doors often serve as a means of egress. A cellar is not a habitable space, therefore, an egress door is not necessary.

In some instances, as in the case of a wine cellar, access from the exterior is made possible through a window well or floor door/hatch. These are for convenience and access only rather than for egress purposes.

If a basement is used as a living space, all egress requirements for fire safety apply. These types of basements tend to be more elaborate in terms of finishes, lighting, and heat and ventilation.

Basement use is somewhat of a personal and subjective choice. However, due to code requirements, there tend to be commonalities in how the space is used. Typically people will want to get the most use out of the space, but that is not always the case.

Some people only use their basement as storage if it does not meet code as habitable space. A finished basement, conversely, can be used as a living space, an office, a bedroom, or even for hobbies such as pottery and woodworking.

Cellar’s on the other hand tend to be used for their traditional purpose of storing items like wine bottles or even preserving produce. Tools and gardening equipment are also commonly stored in the cellar during winter months.

While either a basement or cellar can be finished, a basement is more likely to be finished since it is habitable, that is, it can be used as a living space. Cellars are generally unfinished.

A finished basement will often have the same finishes as any other room in your home. This includes flooring, paint, and trim. Insulation and vapor barriers may also be added to walls before finish materials such as plywood or drywall are installed.

Lighting, as well as heating, ventilation, and air conditioning, are also often installed in habitable basements to make them more like any other room in the house. More elaborate basements may have wiring for sound and multimedia devices as well.

An unfinished cellar or basement might have exposed rafters and beams and the flooring may not be in place. There might also not be any insulation installed either. Basement floors are typically concrete slab, while cellars may have dirt, brick or stone.

Ceiling heights generally vary, however, they need to meet the minimum requirements set forth by code and should be high enough to comfortably stand up in and walk around. A basement or cellar will usually need a minimum ceiling height of seven feet per the International Residential Code (IRC).

While this is a minimum requirement, many basements and cellars have a standard eight-foot ceiling height. Some are even taller at ten or eleven feet which is ideal for storage purposes since the higher ceilings provide more headroom space for larger items like furniture, appliances, etc.

While there is no set rule, basement lighting tends to be more elaborate than that in cellars. The lighting in cellars is usually more functional and practical, with regular incandescent fixtures or fluorescent lights oftentimes exposed without casings or lenses.

Basements, on the other hand – and particularly if they are finished – have fixtures that more closely resemble what might be found in the rest of the house. This may include LED fixtures or recessed ceiling fixtures that are more ornate. It may even include ceiling lamps, sconces, or even chandeliers.

Of course, there are cellars that are both finished and have ornate lighting. A fancy wine cellar, for example, may be very elaborate. But, in general, basements are more likely to have more elaborate lighting simply because they are more likely to be used as living spaces. This, despite the fact that they tend to have windows for natural lighting.

Basements are more likely to have heating and ventilation because they are more regularly occupied. In addition to human comfort, mechanical systems can also provide relief from moisture and humidity. This is particularly important in hotter, more humid climates.

Spaces that are below the ground do have some advantages over spaces above the ground. The thermal mass of the surrounding earth can provide some relief to mechanical heating and ventilation systems. In this sense, a cellar benefits more since it is buried deeper in the ground.

The downside of living below ground level is that spaces are more susceptible to moisture and humidity. Basement heaters and appliances can also cause humidity issues, especially if aggravated with water leaks or flooding from above. This can potentially cause mold growth throughout the year if unchecked.

Cellars and basements tend to be found more in any geographic location that experiences temperature extremes during winter and summer months. In the United States, cellars are usually found in homes with Southern exposures or in the Northeast.

Southern exposure creates a hot environment and the basement provides for a cooler space during these hot months. In contrast, winters in the Northeast tend to be very cold and a basement or cellar can provide a space that is more temperate.

The reason for this, as noted earlier, is that the thermal mass of the soil surrounding a cellar or basement helps insulate the space from more extreme temperatures. This reduces the need for mechanical equipment to condition the space.

While there is some overlap between a basement and cellar space, there are clear distinctions between the two as we’ve covered in this article. The main determining factor is how deep in the ground the space is. Only a cellar is fully immersed in the ground.

On the other hand, basements tend to be more finished and conditioned as a living space – code permitting. A finished basement will make your house look complete, and you won’t have to worry about people thinking that you’re just living in a half-finished house.