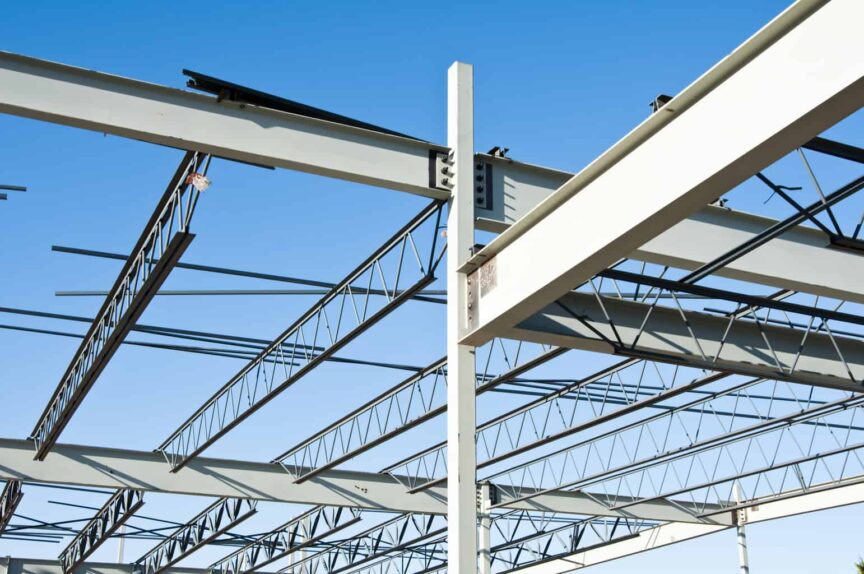 When looking at structural flooring, you’ll notice that the framing is composed of both joists and beams. These parts appear similar – both are long horizontal structural members. So then what is the difference between a joist and a beam?

Beams are meant carry and distribute the main structural loads of a flooring system down to the posts, walls, or columns below. Joists on, the other hand, provide secondary support. They are greater in number and spaced closer together than beams.

How Joists and Beams are Alike

The most apparent similarity in joists and beams is that both are horizontal structural members. That is, beams and joists are building parts that lay flat rather than stand up. Both stretch across long spans. The load carried by joists and beams is applied at a right angle to the length of the span. Another way to say that beams and joists hold up weight pushing down along the long, straight side.

Technically, joists are a type of beam. We use two different names because they perform slightly different roles. The different jobs mean that you need different materials or construction to get the best performance from your joists and beams. Let’s look at the specific tasks they do to understand the difference.

Beams carry a load to posts, walls, or foundations. The main weight of the structure sits on beams. The beams transfer the load to vertical elements that sit on or in the ground. Because they are the main weight-carriers, beams are usually much more substantial than joists. Beams in a building may be steel, engineered wood, or combined dimensional lumber.

Steel beams are stronger than wood, but also more expensive. Steel beams are usually found in big buildings designed by engineers or architects. Wood is used for beams in homes and smaller structures. If you find steel in a home or small structure, it will almost always be a beam and not a joist.

Unfortunately, combined beams are heavy, and their strength is still limited by the size of the dimensional lumber. Engineered beams are designed to be both lighter and stronger than combined beams. Wooden beams get strength from their depth. That is, a beam six inches deep is stronger than a four-inch beam. Both are weaker than an eight-inch beam. Dimensional lumber limits the depth of a beam to twelve inches.

Engineered beams can be even deeper and stronger. These beams have a cross-section shaped like a capital letter “I” (with serifs). The body of the “I” is made from plywood. The plywood can be made to almost any depth, so the beam can be substantial. The plywood doesn’t need to be as thick as dimensional lumber, either. This creates a plywood beam, both lighter and stronger than a solid beam.

The problem with plywood is that it flexes across the thin direction. It is stronger against the vertical load, but it can wiggle horizontally. That’s where the dimensional lumber comes in. The top and bottom of the “I” are made with 2×4 boards grooved to hold the plywood. Now the flexion of the plywood is controlled by the 2×4, while it retains its vertical strength. These beams can be made much longer than dimensional lumber beams.

Joists are a special kind of beam that support a broad, flat surface. They are found under a floor or under a roof. Joists are never alone – you’ll always find a lot of them together. The spacing of joists is small – the standard in framed homes is sixteen inches apart. Joists usually connect to beams at either end. The joists will either sit on top of the beam or be attached along the side of the beam.

In home construction, joists are almost always made from dimensional lumber. They might be the same size as the beam, or they might be smaller. The rule of thumb for frame buildings is that the distance a 2x joist can span in feet is the same as its depth in inches. That is, a 2×4 can span four feet; a 2×6 can span six feet; a 2×12 can span up to twelve feet.

How Are They Different?

Beams are major structural elements. They support the main weight of walls, flooring, or roofs. Beams are some of the most essential parts of the structure. Joists are held up by a beam. They might be smaller, and there will definitely be more joists. Beams are only found under the significant elements, while joists will be spread out under the roof or floor. Here’s a quick comparison:

What About Other Building Parts?

In addition to beams and joists, you will sometimes hear about other elements that hold up roofs or floors. These include rafters, purlins, and trusses. How are these different from beams and joists?

Rafters are similar to joists, but they sit at an angle. Like joists, rafters are numerous and supported by a beam. Joists are always horizontal. Rafters are only found in roof structures, never under floors.

Purlins are crossbeams supported by rafters. They provide more area for attaching the roof decking. They also help give stiffness to the roof.

Trusses are the combined structures that are composed of beams, rafters, joists, and purlins. Truss is the name given to the full assembly of elements that supports a sloped roof. When new homes are built, the truss may be assembled on-site from dimensional lumber, or pre-assembled trusses may be brought in and installed on top of the building.

Joists and beams are similar elements, but they play different roles in a building. Knowing the difference can help you talk about construction more clearly, and it can help you understand the process of building a structure.