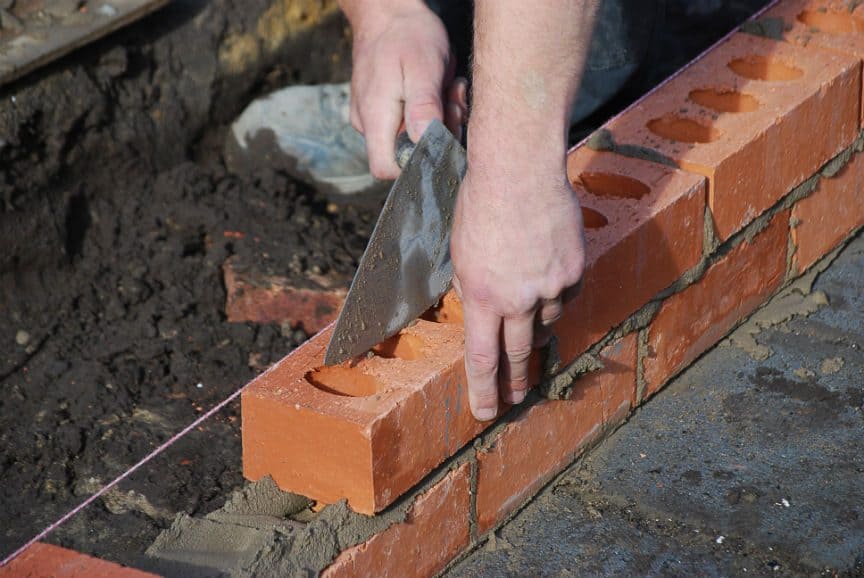 Have you ever heard the term brick veneer and wondered what the difference is between it and regular brick? Is brick veneer made from a different type of brick, or perhaps a thinner or hollow brick?

In reality, the terms “brick” and “brick veneer have nothing to do with the type of brick used, but rather the type of wall assembly. Both brick and brick veneer walls are made from standard masonry brick. The difference lies in how the brick is assembled throughout the wall construction.

Solid brick construction is made up of two layers (called wythes) of bricks that are back to back and joined by cement mortar. A brick veneer wall, on the other hand, is made up of an exterior layer of masonry with a gap of at least one inch (called an air space) and a second layer of interior masonry.

In addition to how the two types of walls are put together, there are implications in terms of structural and thermal performance that distinguish one type of wall construction from another. Let’s take a look at what those differences are in more detail.

A solid brick wall, more aptly referred to as a solid masonry wall – since other types of masonry can be used – is made up of two back-to-back wythes of masonry joined together by cement mortar. This makes for a very solid type of construction.

What’s more, a solid brick wall with two back-to-back layers of brick has the ability to carry the loads of a building, as long as it is properly reinforced with either metal ties or header rows in order to deal with both vertical and horizontal loads.

More precisely, the exterior layer or wythe of brick carries structural loads along with the interior. This is an important structural distinction between this form of construction and a veneer brick wall assembly where only the interior wythe of masonry carries the load.

This type of construction was almost exclusively used in homes up until the 1920s due to its strength and stability. However, it wasn’t uncommon to see it used in homes up through the 1980s at which time insulation requirements created a need for cavity wall construction for thermal reasons.

Solid masonry is still used today in the parapets of brick buildings since roof walls have no thermal requirements. The same is true of other structures that are outdoors and have no need for thermal insulation. Steel reinforced retaining walls, for example, can be built as solid brick walls.

However, the majority of building walls today are made using a masonry veneer system. This is principally due to the thermal requirements of buildings. Temperatures in buildings need to be moderated for the comfort of its occupants as well as to protect the structural and mechanical systems within a building.

A masonry veneer wall is distinguished from a solid masonry wall in that there is an air space separating the two wythes of masonry. This air space is important in that it virtually eliminates thermal bridging, the tendency of heat or cold to transfer between materials in contact with one another.

In addition, brick veneer wall systems typically have thermal insulation placed between the exterior wythe of brick and the interior wythe. This increases the insular capabilities of the wall, and more importantly, does so on the exterior of the wall before hot or cold air can travel further into the structure.

Structurally, a brick veneer wall carries the load of a building on the interior wythe of masonry. The exterior wythe, that is the veneer layer, is non-loadbearing. It is actually supported by the use of a structural shelf attached mechanically to the interior wythe.

The interior wythe can be but does not need to be masonry. Concrete masonry units (CMU) commonly referred to as block, a wood or metal stud wall, or a reinforced concrete wall can be used with a brick veneer exterior wythe.

What’s more, an exterior veneer wall can also be made of other materials besides brick. Masonry is commonly used, however, stone, concrete and even exterior wood can be used in a veneer assembly. A combination of siding materials can also be used when attached to a structural material.

In essence, veneer simply refers to an outer layer of material used in a cavity wall system. Its role is not structural but rather to provide an exterior barrier from the elements. When used in a veneer wall assembly, brick functions more as a siding material.

Each assembly type has its advantages and disadvantages. For structures that do not require thermal protection, a solid brick wall can be a good choice. Solid brick walls are strong as long as they are properly reinforced. They also require less in terms of additional materials and for this reason, are less expensive to build.

Brick veneer wall systems are more complex. For example, they typically have insulation in the cavity as well as wall flashing and weep holes to keep moisture out. Brick ties and other structural anchoring systems are required due to the separation of the wythes. Structural shelves are also needed to support the outer veneer.

So given all of this, which type of wall system is better to use? Rather than thinking of one system being better than the other, it makes more sense to think about the intended function of the wall and use this as the determining factor.

If the space is going to be occupied by people on a regular basis, then a veneer wall which has superior insulative properties is going to be your best bet. For outdoor and open spaces, a solid brick wall can work just fine. It’s the more cost-effective option and strong enough to get the job done.

Outdoor storage spaces and equipment sheds can also be made from a solid brick wall assembly. Just keep in mind that in very cold climates, you run the risk of any stored equipment freezing. If you have plumbing running through, this is also something you need to take into account.

Of course, you can get around some of these issues by adding insulation on the interior of the wall and wrapping your pipes. But if you are going to be occupying the storage shed on a regular basis, then you may consider a veneer brick wall assembly with cavity insulation.

Regardless of which wall assembly system you use, be sure to apply proper structural reinforcement and clean mortar application techniques to avoid moisture from getting in beyond the first layer of brick. The more carefully the wall is constructed, the longer it will last and the happier you’ll be with the final product.