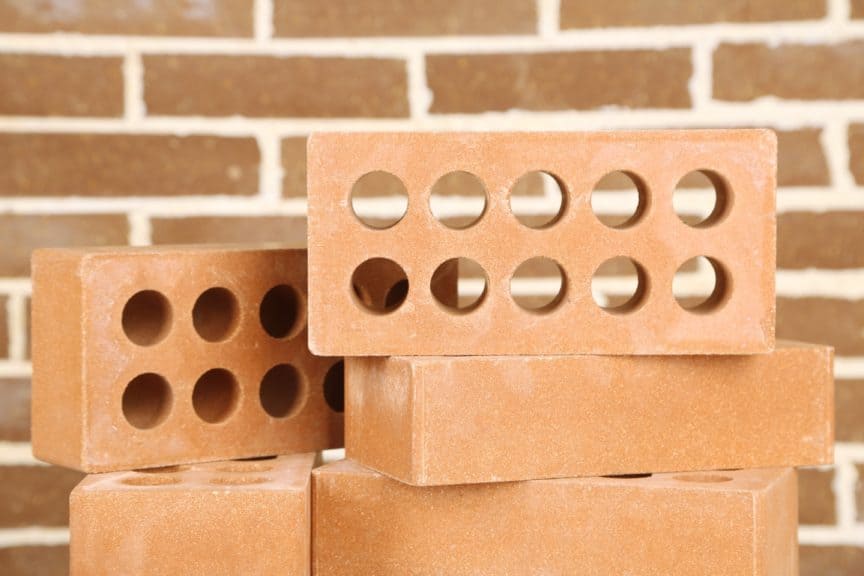 While standard bricks are generally solid , you may come across bricks from time to time that holes in them. It’s important to understand why some bricks have holes and how that might affect any sort of structure they are expected to uphold.

Why do bricks have holes?

First and foremost, bricks with holes in them are meant for structural construction. Many may already be aware of the fact that there are numerous types of bricks. Each brick design, with anywhere from 0-3 holes, was built with a specific purpose. Understanding the purpose of these bricks may aid in future building projects.

Why Holes Make a Brick Useful

Bricks were created for durability. They can uphold vast amounts of weight and endure many climate variables. The holes in building bricks were designed to enhance these features. Not only to save money on materials and distribution but to aid in the security of the structure.

By having these holes, there is now space to connect each brick to one another with rebar and mortar, ensuring the stability of the formation. Also, perhaps one of the more valuable assets to these cavities is that they decrease the amount of weight in a brick. This allows suppliers to transport large orders of brick, without having to limit their load due to a weight restriction. This is also a benefit to the client, allowing more brick to be delivered per order, thus over time-saving money on both deliveries and time.

So, in short, the holes in a building brick are not only an efficient way to cut costs but a helpful tool in the building process, allowing anyone to create a stable structure with ease.

Why Holes in Bricks Save Money

Placing holes in the center of a brick cuts costs, not only for the manufacturer but for the client as well. When creating a brick, a lot of effort goes into the extraction and formation of the clay that creates the finished product. By leaving a hole – or two or three – a great deal of clay is then saved for future bricks. Not only do these holes aid in the conservation of material, but they help in the firing process as well.

When a brick is created, it is put through a process called, firing. By allowing space for a hole in each brick, the firing process is accelerated, quickly penetrating the material and heating it throughout, saving both fuel and time. Firing a brick also increases its durability. When the clay found in bricks reaches high temperatures, it generates a chemical reaction that produces a brick that is weather-resistant as Humanity Development Library states.

The holes in building bricks may not seem very cost-effective upfront. Over time, however, the cost of fuel, material, and manpower can add up, thus saving the manufacturer and the client a good

Do Bricks Without Holes Exist?

Yes. The most common brick without holes is called a paving brick. These bricks are primarily used for, you guessed it, paving. They are solid and flat, unlike the bricks described previously, these hole-less blocks create a different type of stability. They are applied directly to the surface, after being smoothed, refined and topped with sand, forming a durable area that can withstand vast amounts of pressure and sway. Without holes, these bricks can still be used for a variety of projects, including:

If a brick’s hole is damaged beyond repair, it may not be wise to utilize this in a building project. When creating anything, the main concern should be sustainability. Will the structure withstand the elements in order to remain intact? Will the brick affect the sustainability of the wall? If the answer is yes, then perhaps using a broken brick is not the ticket.

However, there may be a creative project where this intact brick could be used elsewhere. Just because it is unfit for structural purposes, does not mean it cannot be used for another (DIY) project, such as a pot or candle holder.

How to Properly Use a Brick with Holes

When building with bricks, the most common structure to create is a wall. There is a systematic approach in building a wall with bricks. If followed correctly, any wall should be able to remain stable for many years. Now, there are many different types of bricks that can account for any type of weather, so choose wisely. When choosing which brick to use for any project, the amount of mortar needed must be taken into account prior to purchasing the bricks. Once the mortar is applied, it can drastically affect the outcome of the height and width of the project. For more information, see How To Build A Brick Wall.

Now, without going through the step by step process of building a wall, here are the two main ways to properly utilize the holes in a building brick:

Apply a generous amount of mortar onto the brick. Stack it in place (careful to place it even with the rest). Spread the mortar evenly, removing any excess on the outside of the stack. The mortar then should seep through the holes, connecting one brick to the other and pasting them together.

This step often uses mortar as well. However, using rebar increases the security of the structure. Generally, the rebar will be fixed into place prior to the brick application. When ready to put the brick in place, slide the brick onto the rebar, until it has met the ground. The rebar should be sticking out of the holes, until all bricks have been stacked, with mortar, and leveled over the top of the rebar.

There are generally only two types of holes in a brick: core holes and frogs (also referred to as recesses). Frog bricks contain one partially indented hole allowing a smooth finished look. Whereas core hole bricks are generally bricks that have three holes placed evenly in the center of a brick.

Depending on the project at hand, these holes could make all the difference. When building a wall with rebar, it would not be wise to purchase the frog bricks because there is no space for the rebar to enter.

Both sets of brick come with the same advantages, cost-effective, easy transport . It just comes down to preference on the desired look for the outcome of the project.

Understanding why bricks are the way they are may be beneficial in any or all upcoming projects. Bricks have been used for centuries to produce sustainable structures all over the world. They are just as useful today as they were when first created.

The holes in building bricks have revolutionized the building process. Ensuring a cheaper, more sustainable project, these holes are an essential aspect of the modern-day building brick.