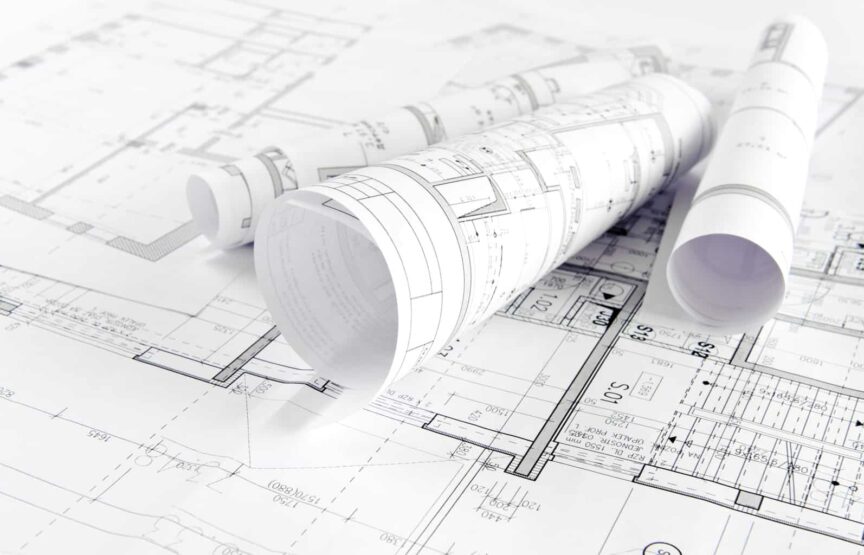 When reviewing floor plans you may have come across portions of the drawing that are shown with dotted or dashed lines. After seeing them, you may wonder what they represent and why they are illustrated differently from other lines on the architectural or engineering plan.

They may sometimes be used to represent the implied extension of an edge or boundary or to call out a reference area. For this reason, context is important in determining what the specific dotted or dashed line represents. Let’s take a more detailed look at some common uses.

A dotted or dashed line is composed of a series of very small lines of consistent size that are regularly spaced. The size of the lines may vary from element to element in order to distinguish one type of object from another, in particular if the plan is complex and has many types of referenced elements.

It’s important that the size of the dashes and the spacing be consistent throughout the plan where the same type of element is described. This allows the reader to more quickly understand what is being referenced. Also, corners should always be “squared off” with dashes of equal size in order for the referenced object to read more clearly.

While not set in stone, it’s common convention to use longer dashes to convey elements that are removed or above the plane and shorter dashes or dots for hidden elements below the plan cut. So if you are seeing a dotted line on a plan, it’s more likely that you are dealing with hidden elements.

This might include objects that are underneath the surface of the reference plane. For example, a dishwasher that is underneath the kitchen countertop would be illustrated using a dotted line (or small dashes) to indicate that it is below the surface shown on the plan.

Another common use of the dotted line is to illustrate the edges of objects that are hidden from view. An example of this is the nosing on a stair tread. The edge where the projection of the nosing begins is shown as dotted or dashed on the stair plan.

This is also true with shelving where there is a top shelf that projects a certain distance and underneath the shelve are smaller sized shelves that do not project as far. In order to illustrate this the edge of the lower shelves would be shown dotted or dashed.

Objects Above or Ceiling Changes

Major architectural features that occur above the plane of the plan cut are shown as dashed on the floor plan. This can include such things as lofts above, lowered ceilings, exposed beams, skylights, and roof overhangs.

Ceilings often have changes in height, and these are useful to indicate using a dashed line to reference the point at which the ceiling height occurs. Soffits and recesses of significance can also be shown as dashed to reference where this occurs above.

If you are viewing a kitchen plan and see dashed lines around the perimeter of the countertops, it’s likely that you are looking at the plan layout for the cabinets above. Sometimes these cabinets are divided into dashed-line sections to add additional clarity to the sizing of each unit.

Cabinets can also be placed above appliances such as refrigerators or ranges, so if the plan you are referencing shows dashed lines at these locations chances are that’s what they represent. In the case of a range, keep in mind that the range hood would also be indicated as a dashed line since it is above.

In the same way that cabinets are typically referenced with dashed lines, appliances that are located underneath kitchen countertops are also shown with a dotted line or small dashes. Again, assuming the plans follow convention, this would help distinguish them from objects that are above.

Important beams in the ceiling above are sometimes shown on the floor plan as a reference. Likewise, door headers or transoms above doors are shown with two dashed lines. This is not always the case, some plans do not include them, however if you see dashed lines in the vicinity of the door swing, this is likely what it represents.

Closet shelving is often shown as a dashed line on plans, in particular where there is a difference in the shelving sizing. The top shelf is usually shown as a thin solid line, while the more narrow shelving underneath is illustrated as a dotted line or small dashes.

Other types of furniture, where shown in plan, may include a dotted line to indicate drawers or shelving underneath. This level of detail is usually not included in the floor plan, but rather on an enlarged area plan or on the furniture plan. Nonetheless, it’s important to keep this in mind since some plans do show this level of detail.

Footings Underneath the Slab

Footings, piers, and other types of structural support are often shown as dashed on the plan level which sits on grade. While these structures are not visible within the space, referencing them on the plan is helpful to avoid conflicts with risers and other elements which might need to penetrate through the slab.

Sometimes dashed or dotted lines are used to graphically reference certain implied conditions. For example, openings are often shown with an “x” in the middle to clarify that an opening exists. Another example is the alignment of an edge, which may be illustrated with the use of dashed lines to show the alignment.

Yet another example is the use of a dashed “v” on ramps to signify the direction of the ramping, from low to high. A similar dashed symbol is used with doors to signify which side the hinges are on. These dashed lines do not represent actual conditions, they are merely graphic representations used for clarity.

These lines can be distinguished by their location relative to the plan, usually at the perimeter of the property or landscape. Dash-dot lines can have two or three dots followed by a longer dash, or they can be single dots. If there is a key to help clarify the linetype, it’s usually a good idea to

Demo lines, as the name implies are dashed lines that are used to represent items to be demolished on demolition plans. While these types of floor plans are typically separate from the construction floor plans, they are nonetheless part of a typical architectural or engineering set of drawings

Dotted or dashed lines can be used to represent many things on a floor plan. We’ve covered some of the common types of uses, but there are many possible representations. The best way to determine what the lines illustrate is to think of them in the context of the overall drawing.

Depending on what the room or space is, what the specific elements surrounding it are, and what type of floor plan they are shown on, these factors can all provide clues. If unsure, reference other related drawings such as enlarged area plans, elevations, or sections to determine what the lines indicate.