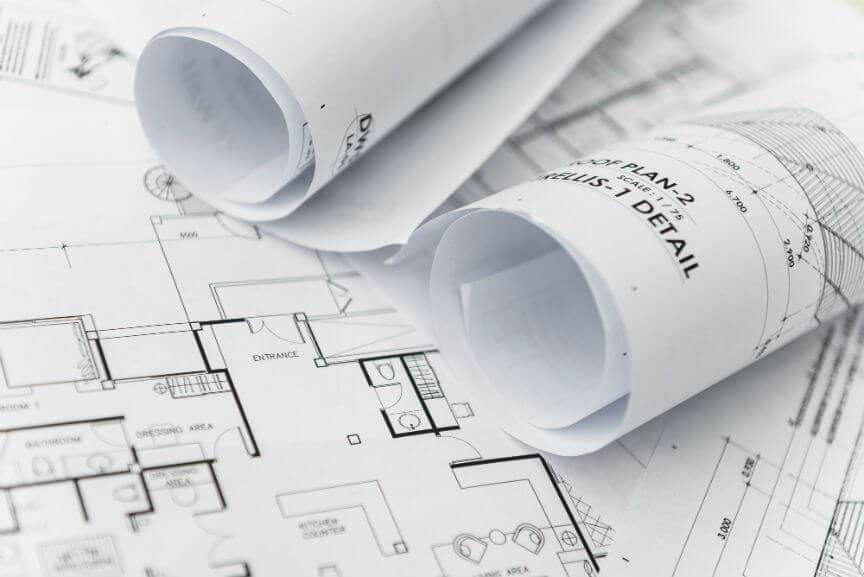 Both site plans and floor plans are orthographic projection drawings viewed from above ground looking down. They are essentially complimentary plans which show different details of a proposed or existing building and its surroundings.

Site plans detail the exterior portions surrounding a building structure, while floor plans focus on the interior portions, up to the outer boundaries of the building. Floor plans include interior walls, stairs, and show openings as well as other details within a building. Site plans, on the other hand, show outdoor hardscaping, paving, roads and other elements within and beyond the boundaries of the property.

Site plans may include the outline of a building, but it is used only for reference and is devoid of any interior building detail. When a floor plan and site plan are overlaid, they can provide a more complete picture of the building relative to its surroundings.

Typically, floor plans show the configuration of walls and columns, the shapes and dimensions of spaces, the locations of doors and windows, and the connections between spaces and the inside and outside of the building. Beyond the plane of the cut, other horizontal surface details are visible such as counters, tabletops, cabinets, etc.

Any horizontal surface that is attached to the building structure is shown on a floor plan. This includes items that are attached to walls or to the floor. Free-standing, movable furniture is usually not included but rather shown on furniture or fixture plans.

One of the critical aspects of a floor plan is the necessary distinction between solid mass and spatial void. Surfaces that are cut are usually illustrated with a heavier line weight than surfaces that are beyond the cut plane. Hatching is often used within walls and other structural elements to help distinguish them.

In order to convey depth in a floor plan, architects or designers use a hierarchy of line weights. The heavier line weights represent elements that are cut through in the plan. Intermediate line weights delineate edges of surfaces that are beyond the cut plane. The lighter the line weight, the further the object is from the horizontal section cut.

Floor plans typically include a north arrow for orientation. Normally the north arrow is aligned so that it points towards the top of the page. However, this can sometimes vary as building plans are often represented to emphasize the primary circulation axis.

Actual north (true north) may be at an angle, in which case assumed north (plan north) is used so that the plan is laid out horizontally and vertically on the page, rather than at an angle. This makes viewing the floor plan easier and circulation patterns easier to understand.

Floor plans are usually drawn at a scale of 1/8″ = 1′-0″ or 1/4″ = 1′-0″. Larger buildings may require a smaller scale, such as 1/16″ = 1′-0″ in order to fit within the drawing sheet. It is common for portions of floor plans that require more detail to be shown at an enlarged scale. Usually, these detail plans are shown on separate sheets within the drawing set.

A site plan describes the location and orientation of a building on a plot of land and in relation to its context. While the site plan references the building structure, the main emphasis is on its surroundings. This is represented in a higher level of detail of the land around the building.

Site plans include the legally recorded boundaries of a site as well as the physical topography within a site. Natural site features, such as trees, landscaping, and watercourses are included. Likewise, existing or proposed site construction elements such as walks, courts, and roadways are included.

Site plans may also include architectural structures in the immediate setting that impact the proposed building. In addition, legal constraints imposed by zoning requirements, site utilities, entry points, paths and other significant environmental features are included in the site plan drawing.

While site plans do not show a high level of detail of the building itself, they often times include information on the roofing of the structure. This includes a plan view of the form, massing, and material of a roof. It may also include layout details of the roof such as skylights, decks, and mechanical housing.

Because site plans are orthographic in view and oriented straight downward, it’s difficult to describe vertical aspects of a site or terrain. This is addressed through the use of contour lines, commonly referred to as just contours.

A contour line is an imaginary line joining point of equal elevation on a ground surface. One way to visualize contours is to imagine that horizontal slices are cut through the landform at regular intervals. The profile of each cut is represented by the contour line.

Site plans also differ from floor plans in the type of scale used. While floor plans are designed using an architectural scale, site plans typically use an engineering scale. For example, 1″ = 20′-0″ or 1″ = 40′-0.

If the site plan requires a higher level of detail, or if the building and site are small enough to fit within the building boundaries, architectural scales can sometimes be used. Some typical scales include 1/16″ = 1′-0″ or 1/32″ = 1′-0″.

It is common for true north to be at a different angle that plan north. In order to avoid confusing titles, such as north-east elevation, the orientation that is closest is used. Often times north arrows indicate both true north and plan north to make this distinction more clear.

Site plans and floor plans share some similarities in terms of the way they are drawn. Both are orthographic projections viewed from above ground outlining details of a building and its surroundings.

Where the two differ is in the focus of the plan. Site plans are meant to detail the areas of a plot of land beyond the boundaries of a building. On the other hand, a floor plan details the elements of a building up to the outer edge of the structure.

Usually, site plans are drawn at a smaller scale, primarily to fit within the boundaries of a drawing sheet. Portions of floor plans are sometimes enlarged in order to show a higher level of detail.

When combined together, a floor plan and a site plan can articulate the connection between the interior and exterior of a structure. While they are distinctly different in scope, the two drawings compliment one another and present a more complete picture of a building in relation to its surroundings.